Naomi J. Williams is the author of the new novel Landfalls, which tells a fictionalized version of an actual expedition in the 1780s. Her work has appeared in a variety of journals, including A Public Space and One Story, and she lives in Davis, California.

Q: How did you learn about the Lapérouse expedition, and how did you research this book?

A: I learned about the Lapérouse expedition from an old map that my husband bought for me as a birthday present some years ago. He'd bought it thinking it was a map of San Francisco Bay, but it turned out to come from the atlas published with the 1798 English-language edition of Lapérouse's journals, and actually depicts Lituya Bay in Alaska, which eventually became the setting for two chapters in the novel.

I tell the story of the mistaken-identity map and how I came up with the idea for the book in some detail in a recent blog post here.

I found some amazing things online. For example, there's a chapter near the end of the book that concerns a royal decree that gave Lapérouse's relatives permission to use his name. I found the actual wording of the decree at some French archives that were available online.

I also relied pretty heavily on Google Earth and Street View to give me a sense of the geography of places I've never been.

But the most important sources came from libraries. I'm very fortunate to live a 15-minute bike ride from a world-class university research library at UC Davis. I've read everything there that has anything to do with the Lapérouse expedition, and also benefited from inter-library loan to procure sources they didn't have.

I'm currently working on a new blog post about my love affair with the library and a few of my favorite library finds. 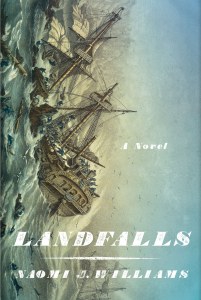 Q: What did you see as the right blend of history and fiction as you were writing Landfalls?

A: I tried to hew as closely to known "facts" as I could for this project. Not because I think that's how you're "supposed" to do historical fiction or because I owe it to readers or even to the memory of the Lapérouse expedition.

It was just a challenge I set for myself, a set of constraints around which to work, like the challenge of writing a Shakespearean sonnet, with its particular rules and conventions. I didn't, for instance, make up or conflate any members of the expedition. And I never knowingly altered the timeline of events.

But around those general outlines, I fabricated a lot. I imagined personalities and motivations and emotional baggage, of course.

Many of the women in the book are largely or entirely my creations. I was determined to include the voices of women in my seafaring yarn, but -- not surprisingly -- the historical record isn't very helpful in this regard.

I had some salient details about Lapérouse's sister, who narrates a chapter near the end of the novel, but a native girl narrates an earlier chapter, and although I tried to make her as authentic as possible through extensive research of her culture, she herself is entirely fictional.

Q: How did you come up with the book's structure, which includes a variety of characters and settings?

A: I am not prone to flashes of insight or genius. I'm a plodder in the worst way. The book is the result of nearly a decade of incredibly slow, painstaking research and writing and revising.

But the basic conceit of the book -- the story of the expedition told by different narrators in every chapter -- did come to me in a flash, very early on.

Also the idea to see the project almost like a set of etudes on approaches to story-telling, playing with point of view, tense, structure, time, etc. -- that also came to me quite early in the process.

A: I can't possibly do justice to all of the writers who've influenced and inspired me over the years, but here's a sampling: The first travel narrative I fell in love with was an abridged, kid-friendly version of The Pilgrim's Progress. I grew up in an evangelical Christian family, so this was on our bookshelf. I loved that book -- more for the adventure aspects than for its heavy-handed allegory.

And I've always adored novels of the sea -- Robinson Crusoe, Moby-Dick, the Aubrey-Maturin series by Patrick O'Brian, C. S. Forester's Horatio Hornblower books. I have no first-hand knowledge of ships or the sea. Whatever sounds authentic in that regard I picked up from reading all those books.

And I know this is a cliche, but I worship Jane Austen -- there's a chapter in the novel that I quite deliberately set out to write as a kind of homage to her genius for devastating social criticism played out in genteel-seeming conversations in genteel drawing rooms.

My undergraduate and graduate training was in Japanese literature, so although this book wouldn't seem to have any direct relation to that, it's there. I've got a chapter near the end of Landfalls that's actually a retelling of Akutagawa's story, "In a Grove," more well-known today as the basis for the famous Kurosawa film, Rashomon.

A: Well, I'm actually going back to my roots, both personally and academically. I'm half-Japanese and was partly raised in Japan, and, as I alluded to above, got my undergraduate degree in East Asian Studies, focusing on Japan.

I'm now working on a second novel, also historical, about an early 20th-century Japanese poet and feminist. Her name was Yosano Akiko (that's in Japanese order, with her last name first), and she's quite famous in Japan but not that well known in the West. I wrote my senior thesis about her in college and have wanted to get back to her ever since.

In 1912, Akiko traveled by herself to France. She'd sent her husband, a fellow-poet, on ahead of her, and followed him six months later, taking a ferry from western Japan to Vladivostok, then riding the Trans-Siberian Railway to Moscow and from there making her way to Paris, where she was reunited with her husband and spent several months traveling with him, meeting lots of artists and intellectuals.

As you can perhaps imagine, this was quite unheard of at the time. Japanese women rarely left the country, much less alone. Also, she left behind seven children, all under age 10. (They were cared for by relatives during her absence.) Even today it seems transgressive for a woman to leave her children for six months to pursue love and art.

So -- that's the subject of the new book. It requires lots of research in Japanese, which has required many hours of intense review of a language I've barely used in years. I'm also translating a bunch of her poems into English. I have a 2017 deadline for the manuscript, but honestly, it feels like another decade-long project.