B.A. Shapiro is the author of the bestselling novel The Art Forger. Her other books include the novels The Safe Room and Blind Spot, and she has taught creative writing at Northeastern University and sociology at Tufts University. She lives in Boston.

Q: How did you come up with the idea for The Art Forger and for your main character, Claire?

I combined it into a story that revolves around Claire. She was a young version of me. She’s struggling, no one is willing to see her work. I poured all my frustrations—I wrote five novels that were published and three that were unpublished, and I was feeling frustrated and sorry for myself. That was the core of Claire. Of course, not I’m not Claire any more!

A: I wrote five novels, none of which went anywhere, over a period of 25 years. Then I wrote three [that were unpublished]. It was a 10-year period of writing four novels, including The Art Forger, without getting published, without positive feedback. I was ready to quit. This was the book I wanted to write. I said, either it’s going to make it, or I will go on to career number 6. Fortunately, I didn’t have to go to career number 6.

Q: You’ve said how interested you are in Isabella Stewart Gardner—did you think of writing a biography of her, or was it always going to be fiction?

A: My original plan was to write a novel about her, but she was so much bigger than life, I couldn’t figure out how to do it. She stood up to the Brahmin society here in the late 19th century. Women in that class really couldn’t do anything. She thumbed her nose at it all. She wore dresses from Paris that were revealing. She walked down the main street of Boston with a lion. She wore a headband to the symphony that said, “Go Red Sox.”

And she was the first great American art collector, man or woman. The rebel part of me just loved that. She was so eccentric and so amazing. If I’m asked that question, Who would you want to have dinner with, it would be Belle, hands down. 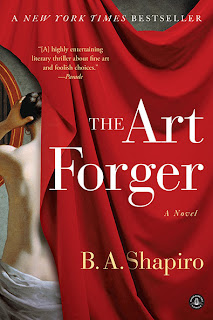 Q: Why has the heist at the Gardner Museum fascinated people for many years now?

A: First of all, it was the largest art heist in history. Nothing has been recovered in all of these years. And the whole crime doesn’t make a lot of sense. It was very sloppily done. These were guys in fake police uniforms. They tied up the night watchmen. Then they leisurely walked through the museum, ripped paintings from the walls—they took valuable stuff, but left valuable stuff. Also, they took stuff that wasn’t worth much. They casually walked in and out [with the stolen art] to a rusted-out old Datsun, and drove away….

I love art; it’s heartbreaking to think of what might have happened to the art over 23 years.

Q: What kind of research did you do about Boston’s art world?

A: We lived in Lexington, we raised our kids there, and then moved back into the city. I live within walking distance to great galleries and museums. I took a class, Art Trek, which was run by an artist, and she would take us to museums and galleries where she knew everybody. I got really fascinated by the Boston scene. That was another component—then I started interviewing real artists for the book. It was fun.

Q: What do you especially like about writing fiction?

A: It’s only novels—I’ve never written a short story in my life. I’ve always loved novels. As a little girl, I was a voracious reader. From the time I read Gone With the Wind—it’s not politically correct to say that any more—I wanted to be a novelist. You can’t make money as a novelist; I became a sociologist. … Then I got the opportunity to be able to write, and I dove into it. People think it’s magical stuff, but it’s hard work. Getting into the zone, and suddenly three hours are gone—it’s such a high.

Q: Does the book have a particular message about art and truthfulness?

A: One of the themes I wanted to bring out was that we see what we want to see. In the book, people are misjudging because of preconceptions. We need to step back and think about what really is in front of us.

In the art piece, part of it has to do with where does value lie? There’s a $15 million Degas in a museum, people love it, and then it’s deemed a forgery. It’s now worthless monetarily, but is it any less beautiful?

A: I’m working on another novel, also about art, but about Abstract Impressionism. It takes place right before World War II in New York City, and [the characters include] Jackson Pollock, Lee Krasner…they were all working for the WPA. Out of working for the WPA grew Abstract Impressionism, the first great American school of art that was exported. The fictional character [in the book]—she’s Jewish, and she’s trying to get her French family out of Europe before the war starts.

A: I’ve been toiling in the trenches for 25 years, and finally at 60 years old I get this break—it’s just amazing to me. [Publisher] Algonquin Books had a big part in it. … It’s been a wonderful ride so far.