Maria Leonard Olsen, who has written regularly for Bethesda Magazine,  is the author of the new children's book Mommy, Why's Your Skin So Brown?  She worked as a lawyer in the Justice Department during the Clinton administration, and lives in Chevy Chase, Md.

Q: How did your own experiences with your kids lead you to write the book?

A: I am a biracial woman of Filipina descent.  I am married to a white man who is primarily of Danish descent.  My children are fair skinned, and my son has blue eyes.  For his first year of life, he had blonde hair.  People frequently mistook me for his nanny.  I became frustrated as people’s comments in this regard increased, and my children started asking me questions about it.  I am a journalist, so I decided to write a book about it.

Q: What age range are you writing for?

Q: What does your family think about the book?

A: They like it.  They remember the comments by strangers.  Children are excellent observers, but not skilled interpreters of events, due to lack of relevant experience.

Q: What has the reaction been to the book from readers?

A: My experience isn’t as unique as I once thought. Almost every time I talk about the book, someone has a related experience. That surprised me, because 15 years ago when this happened to me, I felt so alone, and today that experience is more common. 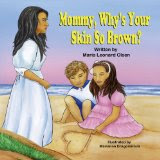 It’s both good and bad. Now there is the parallel [in the same-sex marriage debate] to the fight for biracial or interracial marriage of my parents’ generation; they are parallel scenarios playing out across the country.

When my parents married in 1961, it was illegal in Maryland, a state that [is seen as] progressive, because they were a biracial couple. It was illegal in 16 states, until 1967, when the Supreme Court ruled it unconstitutional. They went to D.C. to get married. Our children find that hard to believe. My children’s children will find it hard to believe that same-sex marriage was illegal.

Q: What would you tell an audience of kids if you spoke to them about your book?

Q: What are some of your favorite children's books?

A: Owl Babies.  Goodnight Moon. Stellaluna. Mama, Do You Love Me?  I think I still know those by heart.

A: I am working on an adult companion to the children’s book.  It will have a chapter on same sex couples, biracial couples, adopting couples, older man/younger woman (in which the man is mistaken for the grandfather of their child, as happened to my half brother, and worried him that his father would die early).  I wrote an article on this, and one area preschool gives it to all new families as a consciousness-raising piece.

I am seeking people to interview for that book, if they wish to contact me via Facebook.

A: That people shouldn’t let their curiosity overwhelm their manners before they speak, especially when children are involved!

My children’s book is available on Amazon. I’m available to do readings and book signings.