Q&A with author Margaret A. Weitekamp

Margaret A. Weitekamp is the author, with David DeVorkin, of the new children's book Pluto's Secret: An Icy World's Tale of Discovery, illustrated by Diane Kidd. Weitekamp is a historian who curates the National Air and Space Museum's social and cultural dimensions of spaceflight collection. She also is the author of Right Stuff, Wrong Sex: America's First Women in Space Program.

Q: How did Pluto’s Secret come about?

A: The great thing about the book was that it was a collaboration between three of us at the National Air and Space Museum. We have a writer’s group, and David DeVorkin was back from the International Astronomical Union meeting [in 2006, where the reclassification of Pluto was a major topic], and he was working on a paper called “Pluto the Problem Planet.”

As a researcher with small children, I said that it sounds more like a storybook than an academic paper. We talked about how it could be a storybook. [A colleague at the museum] told us that Diane Kidd is an award-winning children’s illustrator. I wrote as the story writer, David was the fact-checker, and Diane illustrated.

On the book, it’s “By Margaret A. Weitekamp with David DeVorkin, Illustrated by Diane Kidd.” David kept joking that it should be, “By Margaret Weitekamp in spite of David DeVorkin.” He’s such a stickler for getting all the science right. It was my job to translate that for a children’s audience. 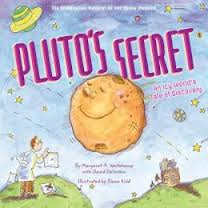 Q: What is it about Pluto that captures people’s imagination?

A: I think children have been drawn to the idea of a tiny little body on the edges of the solar system, and it has a very appealing name. We were struck after the 2006 meeting by the outpouring of emotion [about Pluto’s reclassification]. That’s where we thought it was ripe to turn it into a children’s book.

This is my first children’s book. Diane informed us later that usually she doesn’t get to work directly with the authors at all; she’s usually given camera-ready text [and then she illustrates it]. In this case, we were going back and forth with the story, with the characters, and partly because the science kept changing on us. The P4 and P5 moons were discovered while we were writing. [With the P5 moon], we had to call the press and say there’s another moon [so the illustrations could be changed again]!

Q:  You also have written a book for adults about the history of women in space. What did you discover as you researched that book? 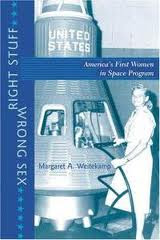 A: It was my dissertation project, and it’s what brought me to space history as a topic. It was at the moment where the second wave of the women’s movement was beginning, and the space age was beginning. The idea at that time was that women might be particularly well suited to be astronauts. [The women were never actually considered by NASA as potential space travelers because] NASA was streamlined toward the moon landing at that same moment when women were proving themselves.

It brought me to space history, which I like a lot. I get to think about science, physics, and also about what’s going on in American society. It’s a combination of what the public is willing to support and what Congress is willing to fund.

Even as women in 1959-60 were going through the testing, NASA defined an astronaut in a way that no woman could qualify. Women had been banned from military flying after 1944. It was a great opportunity to talk to these women, and see what they thought was possible at that point.

Q: How did you end up working at Air and Space?

A: When I was working on that project, I had a fellowship for a year, the American Historical Association’s NASA Aerospace History fellowship. I got interested in that…and [applied] when this job came open. I deal with our memorabilia and space science fiction objects. It’s a great combination of my interests.

Q: What are some of the similarities and differences between writing for kids and for adults?

A: For kids, I found that my method was reading over and over to my son. Someone compared it to writing poetry—every word has to work, it can’t be too complex, it has to read elegantly. David would bring in graduate-level science information, and my challenge was to turn it into a story driven by character that kids would understand. We rewrote this eight or nine times. My son would say, When is this going to be a real book?

David was very interested in the idea that when Neptune was discovered, it was the first planet predicted by mathematics before it was observed by anyone. Pluto came out of a similar search…We were trying to figure out how to explore that without any math, with simple language.

A: I’m working on a couple of books. One, Space Craze, is the book I wish someone else had written so I could do my job more easily. It’s a social and cultural history of America’s fascination with space flight. What does it mean for people to be excited about space flight? It means different things [over the years]. In the 1920s and 1930s, it was Buck Rogers, Flash Gordon, and radio programs. In the 1960s, it was the moon landings. In the 1980s, it was the shuttle program.

David has an idea for a possible children’s book. It wouldn’t be necessarily a sequel to Pluto’s Secret. It was a very nice process. It would be challenging to go back to the drawing board.

A: We are doing this interview with just me, but when we’re presenting the book, we make a point of bringing all three of us out there. I couldn’t have done it without David’s deep knowledge of astronomy. He was wonderful about digging into the details. Diane just brought such a wonderful, imaginative, lively vision. Without the three-part partnership, it wouldn’t be the book it turned out to be.