Richard Ellis is a marine conservationist, artist, and prolific author. His most recent book is Swordfish: A Biography of the Ocean Gladiator. He is a research associate at the American Museum of Natural History, and has served on the U.S. delegation to the International Whaling Commission. He lives in New York.

Q: How does the swordfish live up to its "gladiator" name?

A: The swordfish's scientific name is Xiphius gladius, which actually means "swordfish with a sword" in Greek and Latin. Armed as it is, the swordfish is the quintessential gladiator. It hunts at the surface, and as far down as 3,000 feet. For reasons we don't understand, swordfish often stab inedible objects like boats, submersibles, whales, bales of rubber, and people. (Swordfish have no teeth, so they're not trying to carve out a hunk of meat -- certainly not from a boat.)

Q:What surprised you the most in the course of your research? 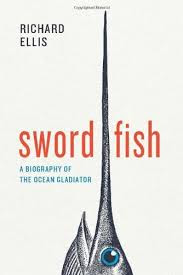 A: That all the biggest swordfish caught by macho fishermen like Ernest Hemingway and Zane Grey were all FEMALES. Full-grown males are only about a quarter the size of females. (The same goes for the big marlins.)

Q: You write that while the swordfish has been "close to extinction," it has "emerged bloody but unbowed." How did this outcome occur?

A: Once upon a time, the swordfish was very heavily hunted, but international concerns for the worldwide populations cause fishing nations to cut back.

A: We really can't answer evolutionary questions such as "how did an animal evolve this way?" I suppose that there was once an ancestral swordfish with a short bill, and over time, its descendants developed longer, flatter bills. But as no one has ever seen a swordfish feeding, we're not really sure how it uses its sword.
Q: What are you working on now?

A: I'm working on a comprehensive book about cephalopods (octopuses, squid and cuttlefish), and also a book about the least-known large animals on earth, the 22 species of beaked whales.

A: That I've written 27 books, almost all about marine life. (The one exception was Tiger Bone and Rhino Horn, about the destruction of wildlife for Traditional Chinese Medicine.) I've tried to communicate the wonders of the marine world, so that readers will understand how marvelous it is, and why they should not be killing all these creatures.