Anastasia Zadeik is the author of the new novel Blurred Fates. She is also an editor and a narrative nonfiction performer, and she lives in San Diego.

Q: What inspired you to write Blurred Fates, and how did you create your character Kate?

A: As a psych major in college, I was fascinated by the nature/nurture debate, the idea that our emotions and behaviors are dictated by neurochemistry, and questions about how we become who we are.

Why do some people with no family history of mental illness and a solid upbringing go off the rails while others, with risky biological markers and dysfunctional childhoods, turn out to be strong, stable, and resilient? How is it that the path each of us takes can go any which way—including sideways?

Then, after college, I began working in neuropsychology research as a programmer and statistician focused on the field of memory, investigating how memories are influenced, formed, and stored, recalled with precise details, misremembered, and entirely forgotten.

Our past is memory, and while the processes take place on a neuronal level, we experience it viscerally and emotionally as nostalgia, shame, fear, sorrow, joy, hate, and love. Our present is also all about the brain—our neurochemistry communicates with the rest of our bodies to interpret the world around us and determine how to react to it.

And it is with our brains that we imagine the future—what might happen next and how to plan for it. And at any given time, past, present, and future intermingle in our brains in ways we still don’t understand.

With statistics like 60 percent of those with familial early-onset history are likely to develop dementia before the age of 60 and an individual is twice as likely to develop bipolar disorder if their parent has been diagnosed with it, I found myself worrying about whether I would get Alzheimer’s and whether my stepdaughter was destined to follow in her mother’s footsteps.

I found that when I shared what was happening in my life, I learned people around me were struggling with similar things in their lives—trauma, loss, addiction, mental illness, the fear of becoming our parents—but few were talking about it openly because, at the time, many of these topics were still shrouded in shame.

Thankfully, this is no longer true. And yet, taboos still remain, and this book addresses one of the most serious of them.

Kate is an amalgam of many women I know, with a bit of fiction thrown in.

From the start, I knew what she looked like and how she spoke, that she had a traumatic childhood she was trying desperately to escape, and that she didn’t want to become her parents but feared she might not have control over this. I knew she wanted to raise her children in a happy, healthy home, but she had no idea what that would look like or how to achieve it.

And I knew that when the steady, reliable guy she’d married admits he’s been unfaithful but doesn’t remember it, his confession will spark memories Kate has suppressed for decades—and she will begin to fall apart.

She can’t explain her reaction because she’s certain her nature/nurture mix will deem her not only unworthy and unlovable, but also irrevocably damaged and dangerous. Complicating matters, as her brain tries to deal with the past intermingling with the present, it quickly becomes clear Kate may not be a reliable narrator. 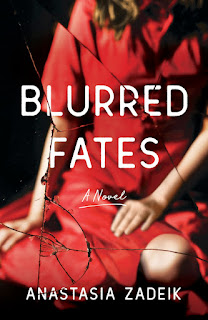 Q: The writer Jamie Freveletti said of the book, “Zadeik's piercing, gut-wrenching, and gripping story about a fractured marriage, buried family secrets, and a woman fighting to regain her life is a remarkable debut that will keep you riveted until the last page.” What do you think of that description?

A: I love this quote because it encompasses so many of the issues the book addresses: infidelity, a dark family legacy, and a woman’s commitment not to fail despite everything conspiring against her.

Though Blurred Fates turned out to be a psychological/domestic thriller, that is not what I had planned. What I set out to write was the story of a woman struggling to save the precious and precarious world she’s built out of nothing but dreams, self-help books, and sporadic visits to a psychologist she can’t be honest with.

I wanted to address how a person can become trapped by the things we suppress, and I wanted to show, with the collapse of her father and the reappearance of her brother, how things beyond our control can cascade, forcing us to confront the unspoken parts of our past.

Q: Did you know how the novel ended before you started writing it, or did you make many changes along the way?

A: I did not know how the novel would end. I am what many in the industry call a “pantser,” in that I write from the seat of my pants. Paraphrasing George R.R. Martin, I plant the seeds of my characters and then let them grow.

There were several events in the novel that came to me as I wrote them and later, when I went to check whether they were accurate depictions of someone in that situation, I was surprised to learn that they were. For example, people dissociating and watching a traumatic event from outside their body while still being in their body.

A: The title comes from a poem written by Kate’s mother, a brilliant, creative, and seriously flawed human being.

The poem doesn’t appear until the last chapter, so I don’t want to give it away, but suffice to say, it is titled “Life, Repeat as Necessary,” and it addresses the main themes of the book—what we remember and how our lives are all intertwined; how lives flow together and apart—past, present; promises, failures; nature, nurture; fate, free-will—and how blurry it can all become.

Each character in the book is struggling in their own way to define themselves and those struggles intertwine; we are the product of our own nature and nurture, to be sure, but we are also the product of each other’s natures and nurtures.

A: I am polishing my second novel, Capture the Light, a book about philosophy, mental health, and art. Told from three female perspectives, the book follows both a troubled young couple who take off from a psychiatric facility on a hopelessly idealistic cross-country odyssey and their mothers, who are desperately trying to find their kids before they lose themselves.

A: I am a firm believer in the power of stories. Several years ago, when I became an empty-nester, I had the good fortune to become involved in local storytelling organizations (So Say We All, the San Diego Memoir Showcase, and the San Diego Decameron project) as well as the San Diego Writers Festival.

In the last six years, I have performed in narrative nonfiction juried storytelling events; served as a writing coach, editor, and producer for dozens of other writers; helped to organize nearly a hundred workshops, panels, interviews, and book club discussions; and watched lives change.