Charles Lambert is the author of the new novel The Bone Flower. His other books include the memoir With a Zero at its Heart. He lives in Italy.

Q: What inspired you to write The Bone Flower, and how did you create your characters Edward, Settie, and Marisol?

A: The first inkling of The Bone Flower came in June 2020. I was living with my husband in a small rented apartment in Rome, under strict lockdown conditions, and we’d slipped into a fairly nocturnal lifestyle, getting up late and going to bed even later, watching TV until the early hours.

The offer was limited – no Sky, no Netflix - and crime fiction, costume drama and horror movies, particularly horror movies, made up a large part of our TV diet. I don’t remember the film that triggered the initial idea, if that was what it was.

What I remember is waking up one morning with a scrap of dream in my head and a What if? question. I scribbled it down and put it to one side, but it stayed with me and became the central event around which the plot revolves. At the beginning of July, we were able to leave Rome and return to our house further south, and the business of writing began.

To answer the second part of this question is much harder. Where do characters come from? Minor characters are easier to account for and two of the supporting actors, so to speak, are based on people I know. But Edward? Settie? Marisol? The main characters in any novel invent themselves, I think, and then let you in on their secrets as you write.

Q: The author Edward Carey called The Bone Flower a “dark, beautiful beast of a book, tender and harrowing, full of cruelties and redemptions, ghosts and orange trees, London in filth and luxury.” What do you think of that description? 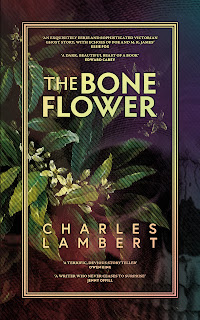 A: How could I not love it? Praise of any kind from Edward Carey is an honor and praise that focuses so precisely on what I think my book is about is both an honor and a joy.

The Bone Flower actually shares a location with Edward’s wonderful spin on Pinocchio, The Swallowed Man, and it’s a place that possesses many of the characteristics this quote attributes to my novel. I’ll leave it to readers to discover what the place is, but be warned. Once visited, it won’t allow itself to be easily forgotten.

A: My normal practice as a writer is to start with a situation, or a character, and just dive in, but The Bone Flower was an exception to this. Using the scribbled note (see above) I began to work out how to reach that point and then to see where it might lead. I ended up with a chapter breakdown and, within each chapter, a fairly detailed synopsis. Miraculously, I stuck to it!

A: The working title was Always, but that was, quite rightly, overruled by my agent and publisher and we brainstormed until we came up with The Bone Flower, a title I’m delighted with. I think it captures perfectly that hybrid of tenderness and cruelty that Edward Carey talks about.

Both elements – flower and bone - are natural, but woven together they turn into something altogether more unsettling.

A: I have some ideas for stories in my head, and a possible sequel to an earlier novel of mine called The Children’s Home. I’m also working on a project with a writer friend that may or may not come to something, but I’m superstitious enough to want to keep that under wraps for a little while longer!

A: Well, I’ve lived in or near Rome for over 40 years now and my next novel, entitled Birthright and out early next year, is set in this extraordinary city at the start of the 1980s, when I first arrived here.

It’s about family, and love, and not getting what you want, and then getting it and not being sure what to do with it, and there are no ghosts, except for the ones we make for ourselves every day, and have to live with.