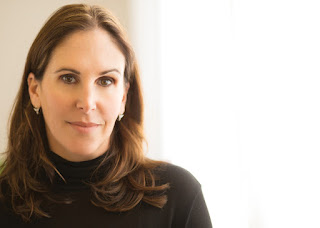 Nan Fischer is the author of the new novel Some of It Was Real. Her other books include the young adult novel When Elephants Fly. She lives in the Pacific Northwest.

Q: What inspired you to write Some of It Was Real, and how did you create your characters Sylvie and Thomas?

A: Thanks for interviewing me, Deborah!!

Some of It Was Real began with my fascination with psychics and the power they can have in peoples’ lives, especially in cases of grief. We all seek an end to emotional pain, and for some, psychics provide a way to accept loss and move on.

I thought it would be interesting to have a psychic who’s unsure of her gift but who provides so much relief for her fans but can’t find personal respite, and to explore that contradiction.

I’m also interested in imposter syndrome—the inability to believe one’s success has been legitimately achieved or deserved. I wanted to create a character, Sylvie, on the cusp of achieving great success, but who doesn’t quite believe she deserves it. I made Sylvie a psychic as that gift is controversial—the perfect job for someone doubting her abilities due to all the critics!

In order to make Sylvie’s emotional arc even more complex, I wanted her own origin story—childhood memories, tales we’re told by family, and sometimes even lies that we use to define ourselves—to play into her imposter syndrome.

Over the course of the novel, Sylvie learns that much of what she was told in childhood is a lie. She must figure out how to become her true self by discovering what in her life is actually real.

Thomas, Sylvie’s love interest, on the other hand, is a journalist and for him, life is black and white and he operates inside the lines of logic.

But he, too, suffers from his own version of imposter syndrome and when he clashes with Sylvie and forces her to figure out what’s real in her life, he gets the opportunity to look at his own origin story, something he’s always seen through the eyes of a child, and re-examine it as an adult.

In the end, both Thomas and Sylvie give each other the opportunity to be the people they were meant to be—the people they secretly wish to become—if they’re brave enough to risk losing everything in pursuit of the truth. 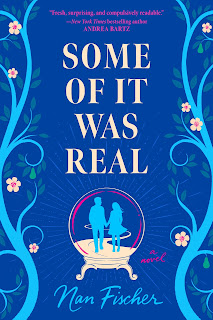 A: I did know how the novel was going to end, but I wasn’t sure how Sylvie and Thomas would react to learning the truth about Sylvie’s early life.

My hope, as I created these characters, was that I’d given them enough dimensions that they’d be capable of rising to the occasion. But characters take on a life of their own, and as an author I try to give them the space they need to make decisions, even if they’re the wrong ones!

Q: The author Andrea Bartz called the novel “an unflinching exploration of identity, trauma, and transcending the past.” What do you think of that description?

A: When I first read Andrea Bartz’s blurb, I looked over my shoulder to see if she was writing about someone else. Obviously, I, too, suffer from a bit of imposter syndrome!

Andrea’s reaction to Some of It Was Real was so incredible and I’m just grateful that she loved the story and was willing to take time out of her busy schedule to both read and blurb it! The fact that she truly understood what I was trying to do with the story and Sylvie and Thomas’s journeys, and conveyed that so eloquently, meant the world.

A: Ah, titles! They are the bane of my existence. It’s easier for me to write a 400-page novel than come up with a title.

Some of It Was Real was the product of my wonderful agent, Stephanie Kip Rostan’s, imagination. Once she came up with it (it’s a line in the story) I knew that she was on to something. My fantastic editor, Kerry Donovan, and the team at Berkley agreed.

In the end, the title signifies choice to me. Believe everything about Sylvie’s gift, her love affair with Thomas, their feelings for each other, or just some of it. Regardless, enjoy the mystery, game of cat-and-mouse and all the twists and turns that hopefully leave readers fulfilled!

A: I am so fortunate to have a second book with Berkley that will be published in August 2023! That story is about a woman named Constance who is so desperate for love and security that she accepts a proposal from a boyfriend she’s unsure she should marry.

When he gives her an antique engagement ring, Constance researches its history and discovers the long-dead man who originally created the ring was an American ambulance driver in France during WWI who wrote letters home from the war that were compiled into a book.

Constance finds that book of letters in the library, recognizes a kindred spirit, and writes a note to the deceased man sharing her fears about her engagement. When she returns the next day to read more letters, she discovers that he’s written her back…

A: What I hope my readers take away from Some of It Was Real, besides my fascination with psychic-mediums, family secrets, and romances that overcome huge roadblocks, is that just like Thomas and Sylvie, your origin story isn’t necessarily the truth. It’s based on your perceptions. And self-doubt and feeling like an imposter at times is part of the human experience.  But what we choose to do, despite our insecurities and fears, is what matters.