Marisa Meltzer is the author of the book This Is Big: How the Founder of Weight Watchers Changed the World (and Me). She writes the Me Time column for The New York Times Style section, and her work has appeared in a variety of other publications, including The New Yorker.

A: I was in my late 30s, trying to reckon with a lifetime of dieting and feeling I had failed at it. I saw an obituary of [Weight Watchers founder] Jean Nidetch—I hadn’t known who she was. I was so intrigued, and the idea came to me.

Q: You write of Jean Nidetch, "When I look at old photos of her before she lost the weight, the physical resemblance between us is so strong, she could easily be my aunt or cousin; she could almost be me somehow transported back in time to New York City in 1961." What do you see connecting the two of you, and how did writing the book affect you? 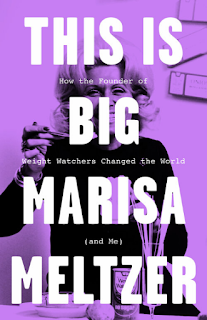 A: We have a surface similarity—similar height, weight, we’re Jewish, blonde, grappling with weight our whole lives.

In some ways I’m more interested in how we’re different. She lost weight and kept it off. I wanted to understand how she succeeded with that, and with starting a multimillion-dollar business.

It wasn’t easy to put a magnifying glass over yourself and your life. Part of my writing process was taking endless notes on my weight and Weight Watchers information. I felt like I was journaling all the time, being a little too tuned into [my] own emotions. It was good for creating a record, but not always the most fun to live through.

Q: What do you see as some of the most common perceptions and misconceptions about Weight Watchers?

A: Maybe some of the misconceptions involve Weight Watchers’ constant rebranding and changing itself. It’s sort of sleight of hand—every January they have a new iteration of how dieting will be easier than ever.

The truth is, there’s no version of dieting that’s easy. And because it’s always changing, there’s an idea that Weight Watchers is still like the 1960s or 1980s version of a diet—hot cocoa with NutraSweet, and you’re weighing things. They do make a big effort to evolve with the food tastes of the times, but it’s confusing.

Weight Watchers is cheap, there’s relatively easy access to it, and it’s a pretty positive place from my forays into it. The people are not mean to each other. You get support.

But it’s easy to get a vintage idea of what Weight Watchers is, housewives sitting around in the middle of the day complaining about the size of [the portions].

Q: In a review of the book in The New York Times, Lily Burana writes, "People — women, especially — who ping-pong around the weight spectrum will feel less alone when they read it." What do you hope readers take away from the book?

A: I definitely hope people feel a sense of being seen or being understood. Weight is very individual, and it’s such a common concern. For me it does feel that there’s comfort in knowing you’re not alone.

A: I’m writing a lot of articles, and mulling over book projects.