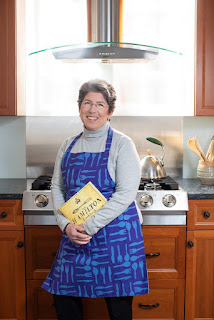 Laura Kumin is the author of the book All Stirred Up: Suffrage Cookbooks, Food, and the Battle for Women's Right to Vote. She also has written The Hamilton Cookbook, and her work has appeared in a variety of publications, including The Washington Post and USA TODAY. She lives in Washington, D.C.

Q: What are suffrage cookbooks, and why did you decide to write a book about them?

A: I had never heard of them—I stumbled on one and from that moment, I was enthralled. Suffrage cookbooks are part of the genre of community cookbooks—church or temple cookbooks, organized by groups of mostly women. They started as a fundraiser, and then were used to open up conversations. It was a way of getting in the door.

It’s an amazing political discovery. If you had a cookbook and a recipe and a conversation about how to make soup, you wouldn’t start the conversation with suffrage. You’d say, I have a cookbook, would you like to see it? It’s only 35 cents.

I didn’t think about the fact that getting suffrage for women meant [gaining support from men]—people who already voted had to vote for change. You had to reach the men through their stomachs, but also you’d reach the women who then would reach the men.

Q: When did you decide it was a good topic for a book? 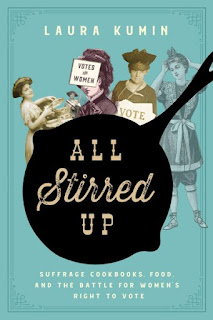 A: Originally I was fascinated to find any suffrage cookbooks—it was like a treasure hunt because only a handful are still left to be seen. There’s only one I’ve never seen—there’s only one copy of it in Clinton, New York, at their historical society. It’s too delicate to be scanned.

After I’d seen them, I realized some people had discovered them, but mostly [these people] were academics. There wasn’t anything in the popular literature about the cookbooks. There was very little written about the marketing of suffrage and mainstream women’s involvement in suffrage.

The topic had never captured anyone’s attention outside of a very small academic world. They’ve written wonderful articles, but they’re not going to be read by the average reader. I wanted to reach everyone out there.

Q: What would you say are some of the most common perceptions and misperceptions about the suffrage movement?

A: I had the misperceptions. Writing this book was my own awakening to this story. I thought the battle was won by picketing and parades. And I didn’t understand how long it took to get the vote. I also thought of them as a unit—that people were pro-suffrage or anti-suffrage. I had no sense of how much dissension there was, and how much World War I split the suffragists.

I really care about the context for suffrage, what else was going on in the U.S. and the world at that time.

Q: Can you say more about how you researched the book, and what did you learn that especially surprised you? 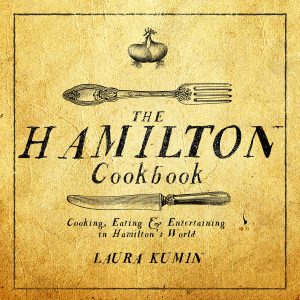 A: I am an incredible fan of the Library of Congress. It’s the most exquisite treasure we have in this country. I learned through the librarians how to research digitally. Some of it has to be done through an institution or is at the Library of Congress, but much of the rest can be done at home. I discovered suffrage cookbooks online.

The research was done three ways. I got a lot of books. I did online research through librarians and on my own—I would follow a thread. I met a woman who collects women’s political memorabilia, who gave me access to [her material]. The book is about what it was like to live then, and what the food was like then. I began cooking and researching.

Q: How did you choose the recipes to include, and how easy were they to adapt for today's cooks?

A: I had two goals. One was to represent the diversity of the cookbooks—I got something from every cookbook. Then I wanted the recipes to recreate all different parts of a meal.

The food was bland and overcooked—how did I keep the essence of the recipe but change it so it was not overcooked and was adequately spiced? I looked for more modern recipes for a similar thing, and looked at how it evolved over time and what people were adding that they hadn’t before.
Q: What reaction have readers had to the book?
A: I've been delighted by readers' reactions. From a series of talks I've done via the Jewish Book Council all over the U.S. to an Instagram Live session with a Russian writer, readers have been fascinated by the story of the suffrage cookbooks and by the cookbooks themselves.
So far no one has come forward during my talks with a story of an as-yet undiscovered suffrage cookbook that they know about, but I'm hopeful that one day that may happen.
I have been pleased to find that many readers and audience members at my programs have been making the links (as I do in the book) between the fight for suffrage and more modern battles for political and civil rights.
Q: Are these recipes difficult for a less accomplished cook?
A: There are many adapted recipes in my book that are quite easy for a "less accomplished" cook. For example, Jack London's stuffed celery (pp.52-53) - no cooking required!
Lots of the other recipes are simple too, such as the fruit punch (pp. 56-57), cheese rice (pp.223-224), the French dressing, which is really a simple vinaigrette (p.267) and the brownies (pp. 288-289.) Although some of the recipes have a number of steps and/or ingredients, none should intimidate a home cook.

A: I have created a new author website. Cooking is common ground—we all cook, and we all eat. People get divided by politics and issues, but when you talk about food, you sit down and eat, you look at the cooking, you see how [so much] starts from basic things we all have in common.

Gingerbread is a very common thing—you can divide us but at the end of the day we are all going to sit down and eat gingerbread or something wrapped in dough.

--Interview with Deborah Kalb. Here's a previous version of this Q&A. Laura Kumin will be participating Feb. 27 in the Temple Sinai Authors' Roundtable.
Posted by Deborah Kalb at 7:18 AM