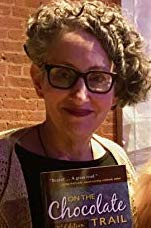 Deborah R. Prinz is the author of the book On the Chocolate Trail: A Delicious Adventure Connecting Jews, Religions, History, Travel, Rituals and Recipes to the Magic of Cacao, now in its second edition. She is the rabbi emerita of Temple Adat Shalom in San Diego County, California.


Q: How did you come up with the idea for On the Chocolate Trail?

A: My husband, Mark Hurvitz, who’s also a rabbi, and I were traveling in Paris. We went to a number of chocolate shops. [At one shop] I happened to pick up their company literature, and I read something about how Jews who had been exiled from Spain brought chocolate-making to France. I had never heard this before.

I thought about how Jews followed lines of dispersion from Spain, and what chocolate centers existed in the early part of European contact. There was an overlap. It made sense that Jews who were exposed to chocolate-making would be involved in the chocolate business. I followed that first “oh my gosh” feeling. 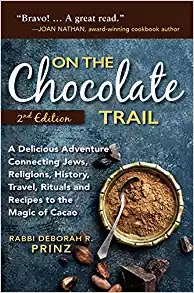 A: I researched both by tasting and by reading. I tasted as much as I could! And I had three fellowships to pursue my research. I did a lot of reading, and I learned a lot of stories, not only about Jews but Catholics, Quakers, Mayans, Aztecs.

In terms of surprises, the first was that there was an overlap between religion and chocolate. And how chocolate evolved over the years from primarily a beverage to an eaten product. How involved Jews were in the business surprised me. There was a lot of learning.

A: The one I’m about to eat that’s right in front of me!

Q: What was the reaction to the first edition of this book, and why did you decide to write a second edition?

A: The reaction to the first edition was great. I was surprised by the number of requests I received, and the publisher was thrilled with the sales. That generated the second edition—the idea was to update it so it was available to people in its current form.

The second edition has additional information, such as about deities being formed into chocolate--Jesus, Buddha and others—and the controversies that raised.

I updated the list in the back of the book about religious and ethical values you could use when buying your chocolate. The last chapter of the first edition was a full conversation about what makes an ethical chocolate, what should I be looking for. I updated and expanded that.

There were 13 recipes in the first book; now there are 25. And there are new sidebars, about halal chocolate and kosher chocolate, and what did Alexander Hamilton drink.

Q: So what should someone look for in terms of ethical chocolate?

For some Jews, it’s is it kosher or kosher for Passover.

The most compelling question: Is it from a country that has child labor and slavery in chocolate growing and harvesting?...Over two million children are working in harsh situations harvesting cocoa. It’s horrible.

A: I have some ideas. I’m working on a chocolate book relating to the chocolate trail. I have a second book in the series in mind, and I’m working on something different. I’m looking at celebratory breads—challah, babka, and other examples in the Jewish tradition, and lots of other cultures with celebratory yeast breads.

A: The book became the basis for a museum exhibit mounted by the Bernard Museum of Temple Emanu-El in New York City. That exhibit is now available to travel.

--Interview with Deborah Kalb. Deborah Prinz will be appearing at the Temple Sinai (D.C.) Authors' Roundtable on March 23.
Posted by Deborah Kalb at 8:11 AM