Q&A with Caroline and Charles Todd 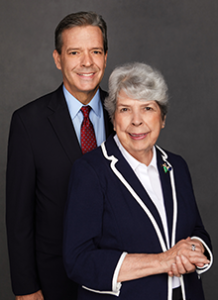 Caroline and Charles Todd are a mother-son team who write under the name Charles Todd. Their new book, the latest in their Inspector Ian Rutledge mystery series, is The Black Ascot. They also write the Bess Crawford mysteries. They live on the East Coast.

Q: How did you come up with the idea for The Black Ascot?

Caroline:  While doing other research some years ago, we’d come across an actual photograph of the famous Black Ascot races in 1910.  We knew at once that it would make a great backdrop for a Rutledge. The only trouble was, Rutledge wasn’t an inspector then.

Later, we decided we could use it as part of a cold case, with Rutledge looking back over a span of 10 years. And that was intriguing, since memories had faded, people questioned in 1910 had died or moved on. It was a challenge to figure out how he would go about it.

Charles:  For those who don’t know the background of the Black Ascot, the Ascot races are still the start of the Season, with the royal family present and everyone who is anybody trying to outdo each other in the latest fashions. Think Oscar Night. 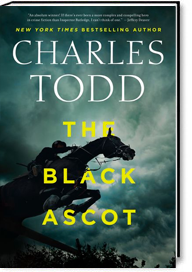 King Edward VII, who loved the races, died in the spring of 1910, and the first thought was that with the court in mourning, the June races should be cancelled. Others argued that the King wouldn’t have wanted that, and the races ought to be held—but everyone in mourning black.

It was done, and everyone was as fashionably dressed as ever, only in the deepest black. And what better name could the newspapers give to Alan Barrington than the Black Ascot Killer, and taunt Scotland Yard for failing to bring him to trial?

Q: How do you think your character Inspector Ian Rutledge has changed over the course of the series?

Caroline and Charles:  Only a few years have passed since the end of the war, and for Britain, the scars have yet to heal. For Rutledge, the struggle to live with his shell shock and the presence of Hamish in his mind has been hard, with ups and downs. And yet trying to cope is also his salvation.

He doesn’t know that—it’s a recent finding—but in his own way he’d doing the right thing for himself, like so many actual sufferers after the Great War. His sense of duty has been sharpened by his military service, and the war has also made him more compassionate. 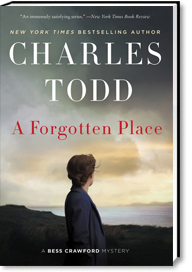 He hasn’t gotten married, of course, but until he feels he can control his nightmares, he’s not likely to risk frightening someone he loves. He’s an intriguing character to write.

Q: What similarities do you see between Rutledge's shell shock and the impact war has on soldiers a century later?

Caroline and Charles:  Sadly, too many similarities. PTSD has now been recognized as a war wound, just like any other, and that helps soldiers who are suffering from it.

In Rutledge’s day, even the family of a soldier with shell shock felt he had disgraced them. You can imagine how the village or employer or neighbors felt about him. That’s a double burden for any man.

But PTSD can still lead to suicide today, just as it did back then. And that’s the tragedy. A man who has served his country honorably shouldn’t feel he has no other way out of his pain and his nightmares. Hopefully Medicine will find answers. These men deserve it.

Q: How do the two of you work together on your books? 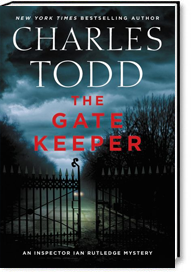 Caroline: We learned early on that if we were going to work together, each of us had to know everything about the period and the setting and even the characters that the other person knew. Otherwise, we’d be going off in different directions.

And so to make collaboration go more smoothly we do everything together. That way we come across as one voice, rather than two people. It’s also why we live in different states—we have our writing lives and we enjoy our personal lives.

Charles: We begin with Chapter 1—or the first scene if it’s a longer chapter. Getting that right is like making a good foundation for a house.  That often takes longer than any other chapter.

We never outline, and so from that foundation we can build each scene that follows on what has gone before. It’s rather exciting to do that, to see where the plot and the characters will take us.

We talk about a scene, who is in it, where it will go, and what role it plays in the plot, and as we do this, we will start writing, testing things, until we are satisfied. Then that scene goes in the master file and we move on to the next.

Caroline and Charles: We’ve just handed in the next Rutledge for 2020. And our editor tells us she loves it. That’s a good sign!

Still debating on the best title, but it’s another psychological suspense, letting the reader see two sides of a tragedy that will draw Rutledge into the sights of a murderer.

Caroline and Charles: We’re hard at work on the new Bess Crawford for September. Bess is in Paris during the Peace Talks, and the task assigned to her by Matron in London isn’t going well, even as she realizes that she must make a decision about nursing and what to do with the rest of her life. We’re looking forward to discovering the answer to that ourselves.

--Interview with Deborah Kalb. Here's a previous Q&A with Caroline and Charles Todd.
Posted by Deborah Kalb at 6:40 AM