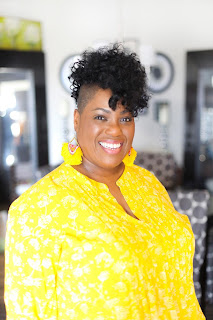 Vanessa Brantley-Newton is the author and illustrator of the new children's picture book Grandma's Purse. Her other books include Don't Let Auntie Mabel Bless the Table and Let Freedom Sing. She lives in Charlotte, North Carolina.

Q: How did you come up with the idea for Grandma's Purse?

A: I have been illustrating children's books for a long time now and while I really enjoy doing the illustrations for other people’s books, I knew that there were stories that I wanted and needed to share with children as well.

My Grandma Bert was a character that made a big impression on my life. She was a very tall, dark, well-dressed and hilarious woman. She made me laugh with her crazy antics and such.

She was from Beaufort, S.C., Low County and she was Gullah. Gullah people are from the low country area of South Carolina and Georgia. They are often called Geechee or Gullah Geechee! They are descendants of African slaves who arrived on the islands of Beaufort, S.C.

They have retained more of their African culture than most African Americans through food, music, and language--a language called "Gullah," and my Granny spoke it and my family still does to this day. 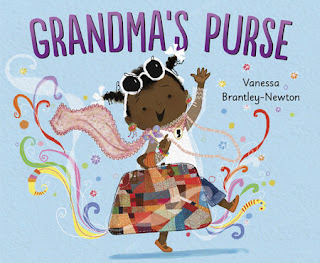 She was always carrying a purse. She was a fisherman and even while she fished would dress up for it. With earrings and a nice shirt and sometimes wearing pearls with her waist-high hunting pants and boots.

She always had something interesting in her purse. Maybe a fishing lure, candy, a scarf for her head, or the Bible, and of course, red lipstick. The kind that stays on for days and days. The kind that little girls like me wanted to wear just like Mimi. It was like dye.

Whatever was in there it was always interesting to me. She had some stuff that I can't talk about! She would put me or my sister on her lap and show us pictures of my mom and dad or my Grandpa Snookie.

We were taught that it was very impolite to go into a woman's handbag without asking, so that was the first rule to getting in there. It was a way of us spending time. No iPad. No cell phone. No bells and whistles. Just a moment of sharing, and it made for a wonderful story. 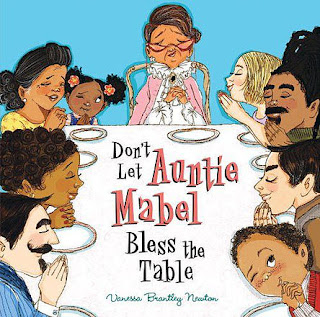 Q: Do you usually come up with the story first or the illustrations (or work on them at the same time)?

A: Funny that you should ask! I had to do the pictures first. The picture brought back the story to me. It is not always this way, but when you are dyslexic, words can become the enemy of the vision that you see in your head. I always tell my story through my pictures first.

It just makes sense to me this way. There where times when I would try to write it down first, but not on a regular [basis,] and I would measure myself by others who write first and it just wasn't me. I had to figure out what worked best for Vanessa and seeing the vision or illustration first helped.

Q: Is your illustrating process different when you're working on your own authored books as opposed to those written by someone else?

A: Yes indeed!! I give myself permission to share my own stories in a way that I can't do with someone else's. I can create characters that are different and strange and look like my people. I can be wild and free and try things that I have never tried before with them. It's very freeing indeed! 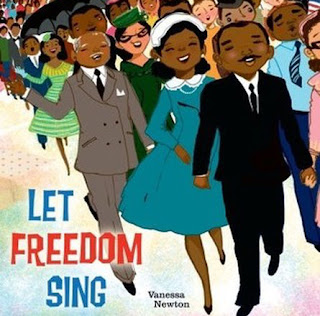 Q: Who are some of your favorite children's book illustrators and writers?

A: Diversity is at the heart of what I do. Not just diversity for brown children, but for all children. Children come here as clean sheets of paper and we get to write a message on them. I want to write the message that Ms. V sees you and loves you just as you are and to remind you that you get to write on others [so] write with kindness.

--Interview with Deborah Kalb. Here's a previous Q&A with Vanessa Brantley-Newton.
Posted by Deborah Kalb at 8:07 AM