Kari-Lynn Winters is the author of the new children's picture book French Toast. Her many other books include Gift Days, When Chickens Fly and Bad Pirate. She teaches at Brock University in St. Catharines, Ontario, Canada, and she lives in St. Catharines.

Q: How did you come up with the idea for French Toast?

A: Two things. When I worked in North Carolina, I worked with a little kid, Grade 1. Racism was very prevalent there. He’d say, Hey, white teacher! I said, I’m not white, not in the way snow is white. I’m like stirred peach yogurt! From then on, he’d call me Peach.

The other thing was I worked with an adult student who was legally blind. I was working with him on how to teach comprehension to little kids.

He said, This is how I can explain it. Describe an apple. I said, Red and round. He said, cut the apple in half and describe it. I said, Juicy, with pits. He said, Is it still red?  I said, No, it’s white! He said, Now make applesauce. Is it red? I tried to describe it—Red? No. White? No.

He said, You see how color is so prevalent and taken for granted? That inspired me to write this book. I told him I would try to write a book that could be read to visually impaired children as well. 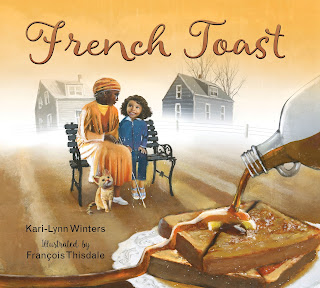 Q: Have you had feedback from visually impaired kids about the book?

A: I haven’t yet, it’s so new. It’s in my head to send it to that man. I would like to hear [how] a child who is visually impaired perceives this book.

Q: How would you describe the relationship between food and skin color in the book?

A: I don’t necessarily see that relationship. I thought that for visually impaired people you can draw upon other senses and understand the world. For me, it’s more about taking the focus off the eyes and putting more on the body.

Food is just a means by which I communicate that idea. And smell—she talks about…a yummy smell. I also tried to involve feelings of the senses—when she throws the Frisbee back and feels she’s part of something.

Q: What age group would you say is the perfect audience for French Toast?

A: I thought the age was somewhere more like a sophisticated picture book. It could be 5 to about 11 or something like that. My daughter likes it, and she’s 11. She felt it would be something I could read to her class. It’s something teachers have asked me to read to a class in Grade 6. I think also adults would like it. 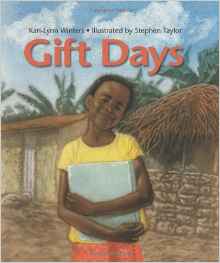 I was talking to a Critical Race professor at my university. We often say “biracial,” but she likes to say “remixed.” She’s biracial, and her children are mixed yet again. She says “biracial” is almost an older term. She said this kind of book is well needed in the field…

I think about gendered roles a lot. I wrote Gift Days, about a girl not being able to go to school, and When Chickens Fly, about having to lay eggs—it does look at gender.

I like the idea of portraying very strong females and supportive loving male roles as well. I wanted it to be the father who bakes with her, and her grandmother who guides her.

Q: And what would you like readers to take away from the book?

A: I just would love them to have an experience where they felt the experience. I am doing research in body image and embodiment in school settings, and there’s a lot about the body not just representing something, but felt and lived within. 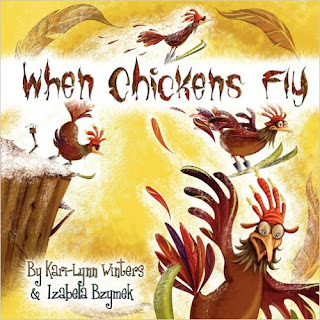 It goes back to the idea of the senses. I would like [readers] to feel hungry, that they can almost taste it and feel it. I wanted to leave them with the resonance of that kind of feeling, and also a feeling of being supported.

Sometimes there’s a difference between teasing and bullying. I always hated being called [a particular nickname] in school until I realized it was [somewhat true] and then I could claim it myself. I was finding my own empowerment.

In the book, Phoebe, by claiming [the nickname], she learns and feels that she can claim it. I don’t think she is going to be bothered by it so much in the future. She describes herself as tea when you’ve added the milk—she’s close to the skin color of French toast.

Q: At what point in the process did you see the illustrations, and what do you see as their contribution to the collaboration?

A: Typically, I didn’t get to see it until the book was done, but I did get to review it [at a late] stage so I could look at the colors. At that time there was only one remark I made, at the time—cinnamon honey was a way different color…You never know what it’s going to look like until it comes out, and color is so important in this book.

The illustrations are amazing—it could be a stagnant story if the illustrations were just plain and realistic. What Francois [Thisdale] does is surrealistic—it almost has a dreamlike feel. It feels like the subconscious.

The cat adds a lot. It shows the emotions. In case a kid is having trouble inferring the feelings, the cat brings that out in its postures… 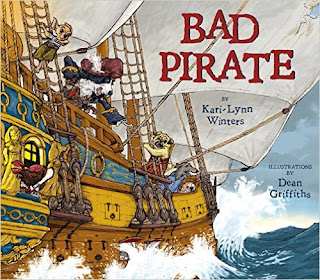 And there’s my hockey book—I’m trying to convince them to do a baseball book.

I’m also doing academic research on body image in schools. We just think of bodies as vehicles to transport our brains, when a lot of learning is embodied.

A: The other thing is the language. I tried to touch on language diversity too. Canada is a bilingual nation. I understand French; I have lived in Quebec…I think a lot of Francophone speakers feel marginalized.