Ginny Daly and Ellen Collins are the authors of the new book The Guest Book!: The A to Z of Guestiquette. Ellen Collins also has written a book of poetry, The Memory Thief. They are both based in the Washington, D.C., area.

Q: How did you come up with the idea of The Guest Book and how did you collaborate on it?

Ginny Daly: I’m fourth-generation of a large Irish family of native Washingtonians, was in advertising in downtown D.C., married a man with an ad agency and have had a five-bedroom beach house in nearby Rehoboth Beach, Delaware, since 1979. I’ve also had NYC digs, a Caribbean home, and a ski house. ‘Tis the perfect formula for attracting houseguests!

I’ve hosted every variety of houseguest from kith’n kin to clients, babies to bankers, ages newborn to 90, family to friends, plus friends of friends, and folks I’d never even met! I began keeping Ginny’s Secret Notebook with “Saints & Sinners” of what worked well and what not-so-well.

For example: combinations of guests that were delightful or disastrous, same with menus and activities. I added in surefire recipes, tips on laundry, shortcuts to make things easier since I was working fulltime and also entertaining a full house of beach guests fulltime every summer weekend for years on end.

About four years ago I looked at my very full notebook and realized I might have a book there. I began writing -- but had almost too much material.

I encountered Ellen at the Rehoboth Beach Writer’s Guild. We’re both writers, both Washingtonians, both have beach houses but have different styles, so we brought differing points of view.

We worked at both our beach and city homes hammering out the topics, then synchronously both came up with the nifty A-to-Z format while we were apart. 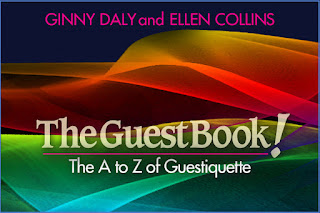 We found an editor, a cover designer, a printer, created our DEVA Press (for Delaware/Virginia and Divas (which neither of us are but it’s fun) and went the self-publishing and self-marketing route.  We’re successfully into our second printing, and maybe making the book into an app for traveling Millennials.

Ellen Collins: The book was originally Ginny's idea, but we know each other from the Rehoboth Beach Writers Guild. We found ourselves at free-writes doing a lot of pieces about house guests, and she asked me if I wanted to collaborate with her on the project.

We came up with the idea of an A to Z format, brainstormed the content for each letter, and divided them up to draft the content. Then we spent lots of time revising and rewriting.

Fortunately, it was easy for us to get together since we both have beach houses (Ginny in Rehoboth and I in Bethany Beach) and also homes close together in the D.C./Virginia area.

Q: As you mentioned, the book follows an A to Z format, and your “O” section is called “Oops! Finessing Sticky Situations.” What are some of the sticky situations in which you’ve found yourselves when hosting guests?

Ginny Daly: All the situations (and more) mentioned in the book have happened to me over the years.  The toilet backing up and overflowing, guest dogs peeing on the rug and/or counter surfing, broken Waterford glasses, red wine on the white rug.

One especially amusing and confounding time that didn’t make it into the book was when a top client’s mother wandered into our master bedroom during the wee hours and into our closet thinking it was the kitchen. She was looking for more vodka! I gently led the befuddled old dear back to her boudoir deciding to say nary a word about it.

The next day we were all silent smiles at breakfast and I assume her son was never the wiser. I think Miss Manners would call that Finesse, wouldn’t you?

Ellen Collins: Perhaps one of the stickiest of situations is when guests plan to stay until Sunday and announce the day before that "we really have nothing to get home for, so we can stay a few more days."

Or when you really don't want your guests to leave their "stuff" all over the living areas and can't find a diplomatic way to suggest that they leave their belongings (laptops, phone cords, shoes, kids' toys) in their rooms when not being used.

The third one I can think of is when guests arrive with lots of food (main dish items) when you have already planned and shopped for the meals.

Q: The “T” section is called “The Dreaded Thank You Note.”  What are your feelings about thank you notes?

Ginny Daly: As hostesses we sum it up in the first line: Yes, you have to. Always.

Hostessing for years at our beach and other homes, I’ve been amazed at how the thank yous have shifted over the years. Guests used to bring or send gifts as well as handwriting a thank you note after the visit. Now guests will bring wine or take us out or fix dinner at our home, which is lovely and well received!

But the thank you note has pretty much devolved to a quick but heartfelt email sometime later, if at all.

Yes, there have been wonderful handwritten notes over the many years and I have saved lots. I even framed a long illustrated one by a cherished niece highlighting every moment of her week. It has a place of honor in the laundry room.

Ellen Collins: A handwritten thank-you note is a must. The host has gone to a lot of trouble to prepare for the guests, has opened her home to them, and a quick e-mail or note on Facebook just doesn't do it.

Social media, while including the word "social," is impersonal. An actual thank-you note shows effort and makes the host really feel appreciated. That's why we included a sample text for a note in our book and also designed an actual note card that guests can use to write those notes.

Q: Ellen, you've also written a poetry collection called The Memory Thief. Many of your poems focus on your mother's struggles with Alzheimer's disease, and you note that when she passed away in 1995, a friend told you, "Your writing will be your healing." Was that the case?

Ellen Collins: Writing the poems was definitely a healing experience. It enabled me to step out of the jumble of feelings I had and to sort them out.

There is an expression that says, "When you name it, you tame it." Naming and describing the sadness and confusion that I experienced enabled me to look at both my mother and myself with new eyes of compassion. This is very hard to explain, but I truly wrote myself through and out of grief.

I also discovered that when I gave my poems to others who were going through similar experiences with loved ones and dementia it gave them some comfort as well. If nothing else, the comfort of knowing they were not alone and that there could be words for what was so difficult for them to articulate.

Q: How did you come up with the title The Memory Thief, and what does it signify for you?

Ellen Collins: When I thought about a title, I gravitated to the poem with the same title, since "Memory Thief" summed up so much of what is true about Alzheimer's and other forms of dementia. It seemed that all of the other poems could fit under the umbrella of that title.

I saw the disease as that thief who takes things a little at a time, stealthily and secretly, so that at first no one notices what is missing. This is what it was like when my mother began to lose one thing at a time: the ability to write a check, to read, to lock her apartment door, to use the bathroom, to lift a spoon.

Ginny Daly: I am now working on a family memoir. Feeling the weight of being the youngest of my family, with my Dad having been born in 1888 and my youngest niece born in 2013. I'm smack in the middle.

Dalys have been in Washington since 1820 with four generations on The Washington Post, so it's an interesting look at our hometown as well.

Ellen Collins: Right now I am working on a collection of poems based on yoga, meditative pieces that start with a pose and move into the deeper levels of the practice. My hope is to combine them with illustrations for a weekly calendar for 2018.

I am also in the very, very, very beginning stages of creating characters for a possible novel.

Ginny Daly: My mother, Mary Tinley Daly, wrote a weekly syndicated column for 25 years in 300+ papers in the Catholic press in the U.S. and Canada in the ‘50s-‘70s.

Titled "At Our House," it covered the doings of a lively household of a large Catholic family in Northwest D.C. with always a little learning lesson with humor and grace. She was a Catholic Erma Bombeck. We didn't save them so I plan to find, compile and publish them.