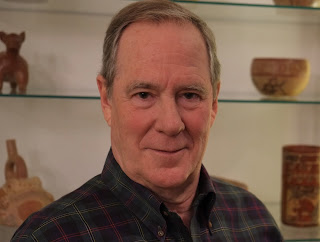 Howard T. Weir III is the author of the new book A Paradise of Blood: The Creek War of 1813-14. An attorney, he lives in Washington, D.C.

A: I became interested in the war in the eighth grade. My Alabama history teacher, Start Harris, was a wonderful story teller, and there were many great stories from that war to tell.

In later life as I attempted to learn more about the war I noticed, however, that there were very few published accounts of that conflict. Indeed, the most comprehensive account was contained in several chapters in a book on Alabama history published in 1851.

I began to search for contemporary accounts of the war and gradually realized what a seminal event this was in the history of the United States.

Perhaps its greatest legacy in modern times was the role it played in the revival and enormous spread of slavery in the United States.

By the early 19th century slavery as an economic institution was on the wane. At that time, it was concentrated in the old tidewater states. The agricultural commodities produced in that area could not support a large number of workers, slave or free.

With the advent of the industrial revolution in England, which was largely involved in the mass production of cotton cloth, cotton became the world’s leading commodity.

The Treaty of 1814, which marked the end of the Creek War, opened up 21 million acres of former Indian land in Georgia and Alabama to settlement by the United States.

This magically fertile land and its mild climate were ideal for the production of cotton on an industrial scale and, particularly given the recent invention of the cotton gin, the demand for cotton was phenomenal.

The cultivation of cotton on this scale required a huge labor force, which was ready at hand in states such as Maryland, Delaware, Virginia and North Carolina.

A number of planters in that region went out of the farming business and into the hugely more profitable slave trade by selling their surplus slave labor to planters moving to the vacated Creek lands.

The result was an enormous forced migration of tens of thousands of African Americans into the Deep South and a revival of slavery as a central part of the American economy. 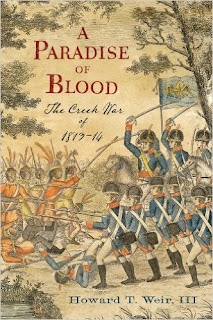 A: Without an army of grad students at my disposal, I turned to Google to locate the widely dispersed primary sources concerning the war. Some of these sources were available for reading on-line from the digitized collections of public and private institutions.

The majority of my sources, however, came directly from the holdings of state archives and college libraries, the National Archives and the Library of Congress.

After I located a document, using Google or traditional research techniques, I would hire a researcher in that locale to obtain the document(s) from the library, usually in the form of microfilm, which I would then have transferred to CDs.

Some of these collections were stored in very unusual places. For example, the State of Mississippi stores its archives 900 feet below ground in a working salt mine in Kansas.

Q: You begin the book by describing Hernando de Soto’s activities in 1535. What impact did that have on the events of the early 19th century?

A: De Soto’s entrada or invasion of what is now the southeastern United States utterly destroyed the Native American polities that had existed in that region for centuries.

Not only did his expedition kill or enslave thousands of Native Americans in the region, but it inadvertently introduced European diseases among the population which killed untold thousands more.

This made it possible for various other tribes of Native Americans to repopulate the land and create new forms of political institutions that replaced the small chiefdoms that had previously ruled.

Eventually these tribes and the remaining local tribes united for mutual protection to form what became the Creek Confederacy that opposed the Americans during the Creek War of 1813-1814.

Q: What are some of the most common perceptions and misperceptions about Andrew Jackson’s role in the war?

A: The view of Andrew Jackson’s role in the Creek War, much like a living organism, continues to evolve. Two hundred years ago he was a national military hero and savior of the frontier from the savages.

He subsequently transformed himself into a political hero as champion of the common man who elected him our seventh president.

Today he is so reviled for, among other things, his role in the Creek War and subsequent Indian removals that there is a movement to remove his image from the twenty-dollar bill.

A: I am still practicing law. When I get the chance I am conducting research on the involvement of a few prominent New England families’ involvement in the African slave trade.

I am also researching the history of the establishment and destruction of a place in Apalachicola, Florida known as the “Negro Fort.” Constructed in 1814 by the British, it became a refuge for runaway slaves until destroyed several years later at the order of Andrew Jackson.