Chuck McCutcheon and David Mark are the co-authors of the new book Doubletalk: The Language, Code, and Jargon of a Presidential Election. Their other work includes co-writing the book Dog Whistles, Walk-Backs, and Washington Handshakes. McCutcheon is assistant managing editor for the CQ Researcher and SAGE Business Researcher, and Mark is an editor for CNN's digital politics site.

Q: Why did you decide to write a follow-up to Dog Whistles, Walk-Backs, and Washington Handshakes?

A: Because of the heavy interest in the 2016 presidential race. We felt that a book of White House-specific election terms would interest people and, hopefully, help inform them at least a little before they vote.

Q: What terms have emerged from this 2016 presidential campaign that especially struck you?

A: Presidential politics, like society, has become much, much more insult-driven. Donald Trump is the obvious example, but many other candidates and their supporters are putting down their opponents, as well as people within their own party.

"Liar" used to be a bit taboo, but now you hear it seemingly every day. You also often hear disparaging terms such as "feckless," "cuckservative," "WHINOs," and "New York values," which has become the 2016 version of "San Francisco values."

On the Democratic side we're witnessing ongoing tension about how left-of-center candidates define themselves. Hillary Clinton repeatedly calls herself a "progressive," a "progressive who gets results" or some variation. But she rarely, if ever, refers to herself as a "liberal."

Though used as a taunt by Republicans much less than in the past, it's still a politically toxic word for many Democrats. 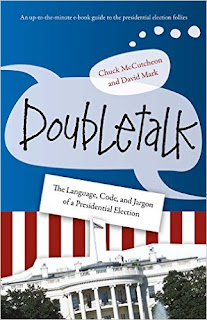 Q: What has surprised you most about the verbiage used in this campaign?

A: The continued reliance on (and overuse of) cliches -- "courage" among politicians to describe virtually any position that they adopt; "sleeping giants" to continually describe Hispanic voters; "scheduling conflict" to describe turning down an invite to something that a campaign obviously does not want to do; "firewall" to describe a protective state or a group of voters.

Also the eagerness among pundits to draw from pop culture -- "throwing shade" and "terrible, horrible, no good, very bad" spring to mind.

One of the most-used in recent years is "evolved" -- which critics call "flip-flopped." Donald Trump has talked a lot about having "evolved" in a conservative direction on gay marriage and abortion rights. About four years ago it was President Barack Obama who was "evolving" -- in favor of same-sex marriage. 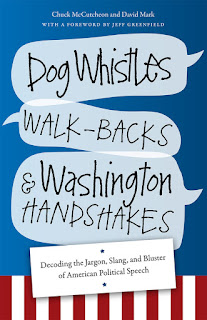 Q: As veteran political journalists, do you have any predictions about the outcome of this presidential election?

Chuck: No. I have a consistent track record of being wrong.

David: I, too, have a far-from-perfect prediction record. I'll note where I've been right and wrong this election cycle to date.

I admittedly did not think Bernie Sanders would be more than a gadfly candidate. The Vermont senator is still highly unlikely to win the Democratic nomination, but he's pulled Hillary Clinton to the left and exposed her limitations as a candidate.

I did foresee Jeb Bush not faring well in the Republican primaries. Having covered him in the past, he didn't seem to have his heart in the slash-and-burn political approach needed to be competitive. The former Florida governor was of course hampered by the Bush name, as well. And for a range of additional reasons this didn't seem like his year.

And I predicted that Ted Cruz would be a significant factor in the Republican nomination fight. Friends and relatives of the liberal persuasion often scoffed at this, suggesting he was just too conservative. But the Texas senator is shrewd and calculating -- he had a game plan that he's largely stuck with, to at least some success like winning the Iowa caucuses.

Chuck: I'm an assistant managing editor for the CQ Researcher and SAGE Business Researcher, two publications that try to explain current issues in the news to an academic audience. I both write and edit for those two publications. I'm also writing three chapters in two college textbooks about government and politics.

David: I'm an editor at CNN, on its fast-growing digital politics site. I also continue to engage in public speaking and media interviews when there's time -- most recently at Harvard's Kennedy School of Government.

A: We welcome reader contributions of political jargon that provokes their interest. They can make suggestions at http://dogwhistlebook.com/suggest.

--Interview with Deborah Kalb. For a previous Q&A with Chuck McCutcheon and David Mark, please click here.
Posted by Deborah Kalb at 6:38 AM