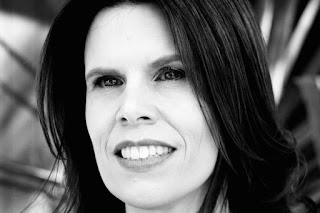 Ruth Galm is the author of the new novel Into the Valley, which features California's Central Valley, forged checks, and a mysterious main character. Galm's work has appeared in various publications, including Kenyon Review Online, and she lives in San Francisco.

Q: How did you come up with your character B., and why did you decide to set the book in 1967?

A: All the early writing for the book was unmapped and instinctual, just me playing around without knowing I was starting a novel. I began following this woman who was on the run, then I saw she was committing a crime (both of these selfish instincts since I wanted to write about movement and about crime), then I understood she was very ladylike, and that she was plagued by a horrible anxiety.

It was all very collagist and sub-conscious, me throwing B. into different scenes and getting to know her and the story that way. Even calling her “B.” was intuitive—it just didn’t feel right to name her, nothing fit—so it was a placeholder until I realized her not having a full name was the point, I wanted a certain blankness and nonconformity in that gesture. I never could have sat down and dreamed up B. in any other way, I think.

And when I had to commit to an era, I chose the late 1960s again simply because they fascinated me, and then as B. and the story’s themes developed, I realized the year should be 1967. That year in my mind was a gateway year, a bridge between two different worlds, and B. at 30 years old would be the wrong age on either side. Q: Some reviews have compared the book to the work of Joan Didion. What do you think of that comparison?

A: Initially, quite honestly, the comparison terrified me. No one can compare to Didion, not in the land of mere mortals, and I was afraid people would be disappointed if they read the novel wanting her.

And then (to rationalize it and calm myself!) I began understanding the comparison in a less paralyzing way: as a compliment to how hard I worked on my style, how I labored over detail and description and relished the lens of a woman not behaving in the ways society expects; my love for California as place in fiction.

Didion is in my blood for many reasons, and the rigor and art of her fiction have pushed me to pursue the same in my own, so I’m trying now to take the comparison for the high compliment it is while understanding I have my own place as a writer.

Q: The book’s setting, California’s Central Valley, is almost like another character. Do you think B.’s story could have been set anywhere else?

A: I’m glad it felt that way because the Central Valley for me was as important to develop as B. and the plot; it’s what got me to the story.

For me the book couldn’t be set anywhere else. There are certainly other valleys around the country, but none that would contrast so sharply with the vaunted coastal and mountain beauty of California and offer that juxtaposition.

And some people have actually mistaken the valley for a desert (which means I got the heat and rainless feel at least!), but using one of the state’s deserts would in fact be too extreme, would not have allowed B. to bump up against people in the same way or find many banks.

Q: At what point in your writing did you come up with the novel’s ending?

A: I honestly had no idea where I was going with the story for so long that it took getting a full second or third draft to compute that I had undertaken a novel, and that this act would require the right ending.

When I understood this, I did have a general instinct of the way I wanted to leave things. But I didn’t have the particulars for a long time. I tried several drafts but still needed to punctuate the ending in a way I wasn’t yet. It took several rounds of editing and revision late into the process to get it right.

A: Short stories. They all seem to be coming from the same well—women and marriages in California and the Southwest, mostly circa the 1950s-1970s. My hometown of San Jose in the ‘70s is especially coming up lately, which has been fun to explore for its pre-Silicon Valley sleepiness, seedy bits, endless empty treeless boulevards, etc.

A: I have never forged a check.