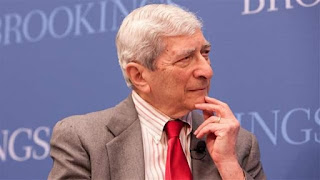 Marvin Kalb is the author of the new book Imperial Gamble: Putin, Ukraine, and the New Cold War. His many other books include The Road to War and Haunting Legacy. He spent many years as a correspondent for CBS News and NBC News, and is the Edward R. Murrow Professor Emeritus at Harvard's Kennedy School. He currently is a senior adviser at the Pulitzer Center on Crisis Reporting, and a nonresident senior fellow at the Brookings Institution.

Q: Why did you decide to write a book about Putin and Ukraine?

A: The idea for this book came from the Brookings publisher herself, Valentina Kalk. We were having lunch in mid-March of 2014. At that time, the big news was the Russian seizure of Crimea and she asked me about it—whether I had been there, whether I had been to Russia.

She said, Wow, with that background, might you consider doing a book on Putin as a leader, why he decided to move into Crimea, what this says about his policy and how it affects relations with the U.S. and the West?

After listening to her suggestion, I thought about it for not more than a few minutes, and said, Yes, let’s do it! She said she would like the book done in one year. I said, That’s hard to do, and she said yes, but please make the effort. It has been an extremely intense period. I did all my own research, interviewing, writing, and editing. Q: You write that “both Russian and Ukrainian history shared the same common root, namely, the capital city of Kiev.” How would you characterize the historical relationship between Russia and Ukraine, and how does that affect today’s dynamics?

After the Mongols leveled Kiev in 1240, Russians who lived there began to move to the northeast, into a small river town called Moscow, and slowly Moscow developed over a 200-year period as the center of Russian or Slavic civilization, absorbing what had been Kievan Rus.

So, for much of the last 500-600 years, the area we know today as Ukraine was part of Russia. Borders were very loose things in those days. The Slavic civilization centered on Moscow incorporated lands we think of as Ukraine.

Ukraine as a country did not become independent until 1991. Only for four years during the Russian Revolution was there a moment in history when a major effort was made to create a Ukrainian state, but it failed.

Q: And how does that history affect what’s happening now?

A: The effect it all has on the contemporary scene is that Russian leaders, not just Putin, regard Ukraine historically as part of Russia. They have great difficulty recognizing that Ukraine today stands as an independent nation. 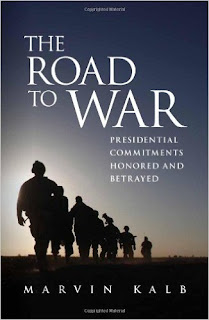 Ukraine deserves its independence, but Russian leaders will always seek to make certain Ukraine is a “friendly” country. Putin, as a very accomplished despot, will define friendship. Putin will be satisfied only if he is convinced Ukraine does not represent a threat to Russia or Russian society.

Q: So do you see Putin’s actions as a continuation of those of previous Russian leaders?

A: One very important thing to note is that Putin is not breaking new ground, either in his attitude toward Ukraine or his actions in Ukraine. In his mind, as in the mind of just about any Russian leader, Ukraine is a kind of cousin living in the attic of the Russian empire, and occasionally the cousin is invited to dinner in the main dining room.

For there to be any kind of peace in the region, there first will have to be an acceptable modus vivendi between Ukraine and Russia, and that is going to be hard to get.

Q: You’ve written that you think Putin has won in Ukraine. What role have the United States and the international community played in how things have turned out so far?

A: In my opinion, the Obama administration has adopted a romantic policy toward Ukraine, thinking of Ukraine not only as an independent nation but also as one fighting for democracy and economic vitality.

The problem is that Ukraine is still struggling desperately to create a national identity, to establish…the most rudimentary qualities of democracy, to build an economy that can work without widespread corruption.

The U.S. must be far more realistic about what Ukraine is capable of doing and what Russia’s attitude toward Ukraine is likely to continue to be. 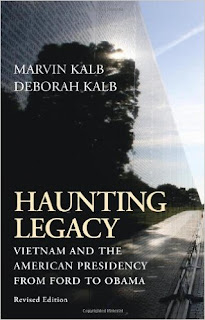 Q: You ask, “Can Ukraine ever truly be independent of Russia?” How do you answer that, and what do you see happening next in Ukraine?

A: In theory Ukraine is perfectly capable one day of functioning as a vibrant democracy with a healthy economy, but that day is not on the near horizon.

The most important thing now is for Ukraine to live up to the promises it has made to Western lending organizations and to the West in general.

That is primarily to clean up corruption, to arrange an acceptable modus vivendi with the breakaway provinces in the southeastern part of the country, and to recognize that Russia is not going away, Russia will always be its largest neighbor, and realism in policy requires that Ukraine and the West recognize that for Russia, Ukraine is an essential part of how Russia defines its national security.

I had, by chance, the opportunity of covering key moments of the Cold War, from Khrushchev’s secret speech in 1956 to the Cuban Missile Crisis to arms control agreements to Henry Kissinger’s shuttle diplomacy in the Middle East. If I’m lucky, I’ll be able to write that history and that should be fun.

A: In understanding the current problem of Ukraine and Russia, it is extremely important to look into Russian history, to be aware that headlines of today come out of a complicated and turbulent history.

No leader of Russia can be oblivious to the history of the country, and in that history Ukraine plays a crucially important role. We ought to read history to understand today.

--Interview with Deborah Kalb. If you were wondering, I'm pleased to say that yes, Marvin Kalb is my father (and Haunting Legacy co-author)! To read an interview about The Road to War, please click here.
Posted by Deborah Kalb at 6:41 AM