McKay Jenkins, the Cornelius Tilghman Professor of English, Journalism and Environmental Humanities at the University of Delaware, is the author most recently of What’s Gotten Into Us: Staying Healthy in a Toxic World. He lives in Baltimore.

Q: You wrote your most recent book, What's Gotten Into Us, after
experiencing a serious health scare. What surprised you most as you looked into the prevalence of toxic chemicals all around us? 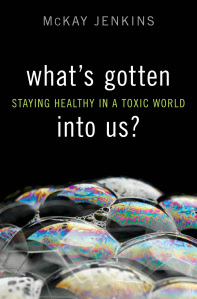 A: I started thinking about toxins as something you’d only be exposed to in food…We think food is safe because the government is telling us it is, or because companies are telling us it is. We were disabused of that a number of years ago. With my cancer scare, I learned that the sources of toxic exposure are not just in food. They are found in places in your house, in your office, in shopping malls, wherever you happen to be. How many chemicals are in asphalt, paint, cosmetics, you name it? The volume of stuff is astronomical…We’ve had plastics around for about 100 years, but only in the last couple of decades have scientists looked at it.

I remember reading after Hurricane Katrina about FEMA putting people in new trailers, and they were made of plywood, and the plywood had so much formaldehyde [that it reached unsafe levels]. It didn’t occur to me [before that] that plywood would be found together with formaldehyde. All our houses are sheathed in it. Formaldehyde was something that I thought of in connection with marinating frogs in 9th grade science class.

Q: In Bloody Falls of the Coppermine, you investigated the murder of two missionaries in the Arctic a century ago, and its aftermath. What led you to write about that story, and how did you conduct your research for the book?

A: That is a general idea that I’m interested in—I write and teach about people in wilderness environments, as humans and nature come together. When I learned about the historical moment when two priests went to the Arctic and were murdered, I saw that it was much more than a whodunit murder mystery. It was in 1913, very late in the colonial process [for this type of first encounter]. The Eskimos the priests encountered, it was such a late colonial moment, and it involved European religions encountering aboriginal spiritual traditions. The priests assumed that the Eskimos were lost children, but actually it was the priests who were lost—the Eskimos were perfectly at home….I went to the Arctic to report the story. There was nobody to interview, it was mostly for atmosphere. The research was from documents, from the trial—basic reporting techniques, except the documents were from 90 years earlier. 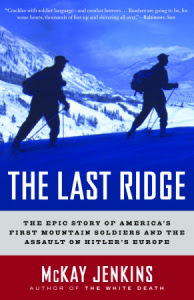 Q: You also have investigated the U.S.Army's 10th Mountain Division in World War II and the death of mountain climbers in Glacier National Park. Is mountain climbing a longtime interest of yours?

A: I was never a technical climber, I never did death-defying rope climbing. I have spent a number of years in the wilderness, as a hiker, leading bike tours, and as a wilderness paddler. It’s a very deep avocation of mine. As a writer, it offers a natural dramatic backdrop. People are in the context of unforgiving circumstances. Almost in a Greek way, there’s a dramatic context to explore human interactions.

Q: In addition to your writing, you also teach both English and journalism at the University of Delaware?

A: And I teach environmental humanities—we look at history, culture, ecology, and the ways humans interact with the environment. I come at it from a humanities point of view. I live in Baltimore and I teach in Delaware, and much of my life centers around the Chesapeake Bay. We read about ecology, about oysters, I take the students out canoeing. My hope is that I can integrate it into a more holistic experience for the students.
I was just teaching a journalism class [today]--every semester I teach a course on The New Yorker. We read all the nonfiction in The New Yorker each week cover to cover. The students are writing long-form nonfiction, using The New Yorker as a model. I’m surprised every year that a bunch of 20-year-olds [would like that]; it seems like your parents’ magazine—I’ve been reading it for about 40 years—but they love it.

Q: What do you think of the changes sweeping through the profession of journalism, and do you focus on that with your journalism students?

A: I sidestep the question by saying that I teach journalism as another form of teaching the humanities. We talk about a magazine piece—we talk about larger questions: What is the piece bringing up about larger issues, such as race. As a teacher of journalism, I am not completely obsessed with whether the students become journalists, [it’s] whether they become really good thinkers. Journalism is still a fantastically effective way to teach. I just turned 50, so I’m not the go-to guy when it comes to digital media, I’m a print person. If it’s nicely written, it will do well; I’ll leave it up to that generation to determine the form it will take.