Edith Pearlman is the author of four collections of short stories: Vaquita, Love Among the Greats, How to Fall, and her most recent, Binocular Vision: New and Selected Stories. She lives in Brookline, Mass.

Q: In her introduction to your most recent short story collection, Binocular Vision, Ann Patchett writes that Binocular Vision "should be the book with which Edith Pearlman casts off her secret-handshake status and takes up her rightful position as a national treasure." And in the New York Times review of Binocular Vision, Roxana Robinson wrote, "Why in the world had I never heard of Edith Pearlman? And why, if you hadn’t, hadn’t you? It certainly isn’t the fault of her writing, which is intelligent, perceptive, funny and quite beautiful..." What do you think of this belated recognition?

A: I think the world is full of cabbages and kings, things happen early or late or not at all.  It’s fun to be writing under the radar.  It’s more fun to be recognized.  But I’ll probably be forgotten sooner or later, and it will always be fun to write. 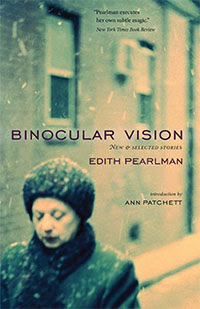 Q: Why have you chosen to write short stories? What about that form appeals to you, and what, in your opinion, are the elements of a great short story? 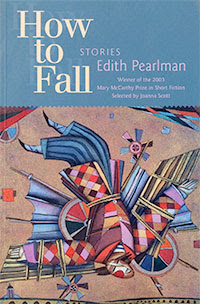 Q: Some of your stories take place in the town of Godolphin, Mass. Is Godolphin a stand-in for a particular Boston suburb, and where did the name come from?

A: I do not know where the name came from!  It fell from Heaven.  Godolphin as Godolphin made an early appearance in the 1980s in a story called Donna’s Ladle, about a soup kitchen in the basement of Godolphin Unitarian.  In the story Felix’s Business, Felix is a professional scribe, writing letters for people who cannot express themselves, a direct descendent of scribes in 19th century Russia, who wrote letters for people who could not write.  He has a storefront office in Godolphin.  The End of the World Man moved in sometime around this time and took his position in front of a hardware store, and as far as I know he stands there yet.  The characters in Mates came in, did lots of things in Godolphin, but vanished after their last child left the nest – not an idle figure of speech, for the characters are more like devoted mammal or avian parents than human.

A boutique hotel was erected after an enterprising person knocked a couple of brownstones together; and this place appears in a story called Shenanigans, and one called What the Ax Forgets the Tree Remembers.  Shenanigans has to do with love of various kinds; Christmas Eve romantic love, Quality Time parental love.  And a score more stories. 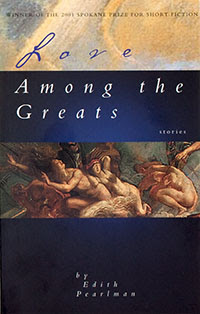 Godolphin began as a distortion of the town I live in, Brookline; but it is so changed by now I think Brookliners would repudiate it.

A: More stories.  Stories are what I do.
Q: Anything else we should know?

A: Returning to my current popularity …Binocular Vision got reviewed; got read; got some awards.  I became, for this short time being anyway, a figure.  I was very lucky. 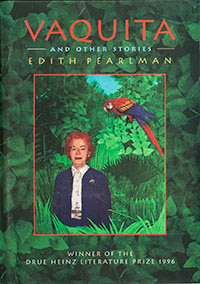 You may say, as people have: Lucky? --  Ah, but your stories are good.  Sure – but they were good earlier when noticed only by a few. And the stories of many other writers are equally good, but they don’t get collected, or the collections don’t get noticed, or their publishers and agents don’t work so hard on their behalf.  To achieve success in the literary field, and perhaps in any field, you have to be talented, you have to work very hard, you have to tolerate disappointment, you have to have friends and colleagues willing to promote your work – and you have to be lucky.  According to Rabelais, it behooves all adventurers to treat their good luck with reverence.  This adventurer does.