Eugenia Kim is the author of the novel The Calligrapher's Daughter. She also has published short stories and essays, and she teaches fiction at Fairfield University. She lives in Washington, D.C.

Q: How much was The Calligrapher's Daughter based on your own family history, and how much research did you need to do to write the book?

A: If I were to give a percentage of how much of the book’s events are “true,” I’d say 95 percent. All of the historical information and sequences are based on research, and a careful creation of a historical timeline laid against the story’s timeline. There are a few things that happen to Najin that are pure fiction, but otherwise, the events are from the stories my mother told about her life in Korea. It’s clearly a novel though, because all of the main characters, while based on real people, are a fiction.

Though I am Korean American, I identified more American than Korean. I was born in the U.S. at a time when there were very few other Koreans around. I do not speak the language very well, nor had I ever visited my country of origin. I had a persistent fear that if I were to write this story, I would get it all wrong: the history, culture, mannerisms, the sense of the language, the entire notion of what it meant to be Korean during the Japanese Occupation period. I would be found out as a “Korean imposter.”

So I read and studied more than 250 books about Korea or written by early Korean immigrants and more recent Korean Americans. I read everything I could find in English about Korea. These included memoirs, history, religion, fiction, poetry, atlases, travel books, translations, folk tales, contemporary literature, and Korean missionaries’ stories. Most fascinating to me were the rare books that were published during the Japanese Occupation, and I was fortunate that my father had saved nearly every book he’d read, including a few from the 1930s and a more from 1950–1970.

I also managed to take a hugely educational trip to Korea about midway through the book’s creation. It took ten years to write this book, largely because of the research behind it. I’m happy to say that by the time the book was published, I could embrace being Korean American with a newfound knowledge, and therefore, confidence, as a result of that research. 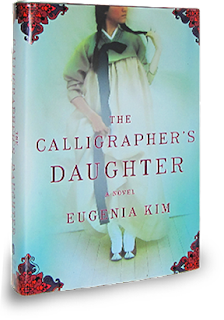 Q: One of the themes of the book involves the clash between tradition and modernity. How do Najin and her parents embody elements of that tension?

A: Being an addict of the PBS series Downton Abbey, the clash of tradition and modernity in that series isn’t so different from what Najin’s family experienced. The father is the backbone of tradition, and also the one who is having the most difficulty adapting to the inevitable change of history. Both the drama and nuance of cultural change are clearly embodied by the Han family who, like the Granthams in the early twentieth century, witness a major shift from an agrarian based economy to industrial, and the unsustainable aristocratic class.

Q: Religion also plays an important role in the book. How would you describe Najin's evolving views?

A: My mother was a devout Christian, as was her mother. Najin is also born a Christian and undergoes a Christian education. But I thought it would make sense for Najin to have doubt, because the often violent social and historical change that she witnessed would challenge her faith.

Q: The book focuses on the role of women in Korean society during the 1915-1945 period. What in particular would you like a reader of The Calligrapher's Daughter to learn about the issues women faced?

A: One of the things I discovered during my research was that all but a handful of books I read from that period were written by men and were about men. In all of Confucian writing, women are rarely mentioned, and only in the context of being a daughter, wife or mother, whose role was to support the men or bear their sons. Additionally, I learned that up until mid-1960, Korean law still permitted a woman to be murdered by her husband if she were found to be adulterous. Considering these facts and Asia's long tradition of silencing women, I hoped this story might redress some of that imbalance.

A: A second novel, something like a sequel, though it’s its own complete story.

A: I’m incredibly grateful to readers for their response to the book, and also appreciate this opportunity to talk about The Calligrapher’s Daughter. Thank you.