Jefferson Morley is the author of Snow-Storm in August and Our Man in Mexico, and the moderator of the website jfkfacts.org.  He has worked for The Washington Post, The Nation, and The New Republic, among other publications, and he lives in Washington, D.C.

Q: Your book Snow-Storm in August looks at a race riot in Washington, D.C., in 1835. How did you first learn about this event, and about the role of Francis Scott Key, who served as district attorney for the City of Washington?

A: I first learned about the riot of 1835 and Key's role as D.A. in the late 1990s when I was reporting on a local history article for the Washington Post Metro section. In a brief passage in Constance Green's Village and Capital, a history of early Washington, I read about Key and the riot. I was intrigued and thought that might make for a good article for the Post. I began to ask people in the Post newsroom if had anybody ever written about this riot or the fact that Key had been D.A. Not only had no one ever written about these facts, not a single person I asked even knew them. So I knew I had a good story. I wrote a long article for the Post's Sunday Magazine in February 2005, called "The Snow Riot."

As I reported that story, I found so much good material that I knew I could write a book about the subject. At first I tried to write the story as a novel thinking that might be more commercially viable, a la Gore Vidal's Lincoln and Burr. But when I told my friend David Corn about what I was doing, he urged me to stick to non-fiction, saying he was sure I would be able to sell it as straight history. He was right. 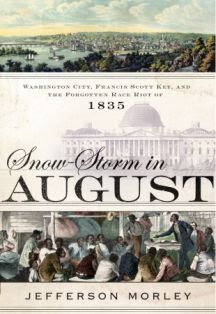 Q: How did the events of 1835 change Washington, and change the relationships among the city's black and white residents?

A: Snow-Storm in August is the story of what happened when the anti-slavery movement emerged in Washington for the first time. Led by free blacks and sympathetic whites, this movement challenged the entrenched power of the slave masters in the city and the Congress by doing something that had never been done before: calling for the abolition of slavery in the District of Columbia. The riot ("The Snow-Storm") of August 1835 was the angry and fearful response of pro-slavery whites to the rise of this movement.

First, the new anti-slavery movement succeeded in injecting slavery into the Washington political debate for the first time. Multiracial opposition to slavery would continue to grow steadily in the city and the nation for the next 30 years, until the soldiers of the Union Army would defeat it and the passage of the 13th Amendment would bury it forever.

Second, after August 1835, white authorities would impose more controls on the local black population (denying them the right to hold most commercial licenses for example). But these controls would slowly lose their effectiveness as the free black population grew. By the 1850s Washington had an abolitionist newspaper. Pro-slavery whites tried mob violence again to put it out of business. They failed.

Q: How did you research the book, and what surprised you the most as you conducted your research?

A: The first thing I did was read all of Washington's daily newspapers, the pro-Jackson Globe, the anti-Jackson Telegraph, the Whig National Intelligencer as well as the weekly Mirror, and Georgetown's Metropolitan. Then I read the circuit court docket and related documents, which provided a granular look at the workings of the law and the courts. I reviewed the city property records, which disclosed who had money, slaves, and land. Last, but not least, I read the remarkable diary of Anna Thornton, which is found in the Library of Congress.

Many things surprised me--the opportunism of Francis Scott Key and the courage of Anna Thornton--but what surprised me most was the size and relative success of Washington's free blacks, led by the remarkable restaurateur Beverly Snow. I never expected to find a free black man flourishing in the heart of the slaveholding republic. But there was Snow, holding forth in his restaurant at the corner of 6th and Pennsylvania 25 years before the Civil War. I would not have dared to invent such a character. 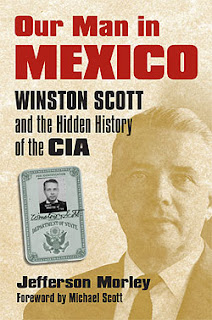 Q: In your previous book, Our Man in Mexico, you examine the life of Win Scott, Mexico City station chief for the CIA in the 1950s and '60s. What new information did you uncover about the CIA's interest in Lee Harvey Oswald?

A: Before I wrote the book it was known that Scott had supervised the surveillance of Oswald during a curious trip he made to Mexico City six weeks before President Kennedy was killed. What I found--and was able to recreate in granular detail--was how Scott came to understand the events leading to JFK's death. I discovered Scott had been deliberately denied information about Oswald by his colleagues while JFK was still alive.

Interviews with former CIA officers and declassified agency records revealed that some of Scott's colleagues were far more interested in and knowledgeable about Oswald than they ever disclosed to any investigation. Scott himself privately concluded that JFK was killed by a conspiracy and wrote as much in an unpublished memoir. When Scott died suddenly in 1971, the CIA seized his manuscript and suppressed it for another 30 years. To this day the CIA has never acknowledged the scope of its pre-assassination interest in the accused assassin.

A: I'm working on sequels to my first two books. One is about the second race riot in Washington history, the race war of July 1919. The other is about the events leading to JFK's assassination as seen by another CIA officer.

A: The American history you have been taught conceals as much as it reveals.