Eleni N. Gage is the author of a novel, Other Waters, and a memoir, North of Ithaka: A Journey Home Through a Family's Extraordinary Past.

Q: Your new novel, Other Waters, features a young woman who travels from New York to India in the wake of her grandmother's death and learns more about herself and her family. Why did you choose India as the setting for Other Waters?

A: Other Waters is about a conflict I think most of us struggle with--the tension between faith and science, or belief and empirical knowledge. Growing up Greek-American, I lived in a world where the magical and the real coexisted--where my aunts would read my future in coffee grounds and I would drink holy water before taking important exams. Indian-American culture, to me, takes the conflict and/or coexistence of the factual and the fabulous to the nth degree. So many of the South Asian Americans I know are doctors or engineers, they work in very scientific professions, but they also have family astrologers who help them set auspicious dates for their weddings. So I wanted to explore what it was like to be Maya--a psychiatric resident who comes to believe that her family is cursed, and who relies on both an analyst and an astrologer to make sense of her life. 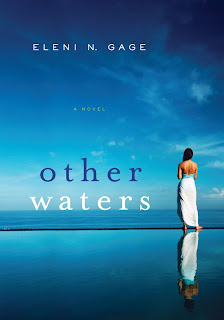 Also, my college roommate, who is still a very close friend of mine, is Indian-American, and since meeting her almost two decades ago, I've been fascinated with Indian culture. So setting a book partly in India--the first and third sections take place in New York--was a great excuse to learn more about it. I took a Hinduism class, for example, and traveled to the subcontinent three times in the course of writing the novel. And as a freelance writer doing research, I was able to write these trips off on my taxes--that's motivation enough to set a book in a fascinating place, isn't it? 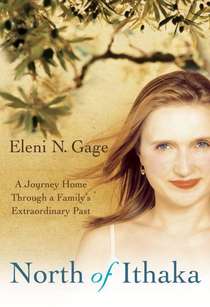 Q: North of Ithaka, your memoir, explores your own journey to the village in Greece where your grandmother, also named Eleni, was executed during the Greek civil war. How difficult was it for you to look into such a wrenching time in your family's history, and what do you see as your grandmother's legacy?

A: Part of my motivation in going to Lia was to reclaim the village--and the house which my grandmother had lived in, which had fallen into ruin after the Greek Civil War. I oversaw the rebuilding of the house because I wanted to transform it from a place of sorrow into a monument, one that encompassed the happy years my grandmother spent living there with her children, as well as the tragedy that followed. I had always seen the village almost exclusively as a dark, somber place. So making the decision to live there was difficult but once I got there I ended up--shockingly--having so much fun with all my neighbors, the senior citizens who still lived in Lia, running around to local festivals, cooking village specialties, trading town gossip. There was so much more going on than I ever imagined on brief trips to the remote village. So what I thought would be a difficult year was an incredibly enjoyable one. Challenging, yes, but so worth it, because now I see the village as a place of beauty as well as sorrow.

My grandmother had five children, so in a very practical sense that is her legacy. Had she lived to see them, she would have had 14 grandchildren and I have never actually sat and counted the great-grandchildren. But in a larger sense, I think she also serves as an example of how every day people get trapped in world events, and how quiet citizens can have reserves of great bravery. And also of how much a mother can love her children, and more generally, how love triumphs over evil. Although the war she died as a result of was a specific event, tied to a distinct time and place, the truths that her life and death proved are universal; almost every day in summer travelers wander up to Lia, our village, because her life made an impact on them.

Q: Your father, Nicholas Gage, wrote a book, Eleni, about your grandmother, which was made into a movie. You write in North of Ithaka that you didn't see the movie or read the book for many years. Did you read the book while you lived in Greece, rebuilding your family's house, and how hard was it to read, given the painful subject matter?

A: Well, my father's book came out when I was seven, and it's not exactly a book for beginning readers! And of course, I knew the story of what had happened from my parents and aunts. So those were two reasons why I didn't read the book. But the third was that I was afraid of what I might read. We lived in Greece while my father researched the book and I remember them interviewing a man who had seen his parents tied to a tree and shot during the war, while I sat on the stairs eavesdropping. I must have been five or six at the time, and that became a very traumatic memory for me. So I spent much of my childhood trying to seek out happy stories. But by the time I was living in Lia, I felt I couldn't rebuild my grandmother's house if I didn't know its complete history. I did get frightened if I stayed up late reading it when I was alone. But it was actually very moving reading the book in the village where it was set. My neighbors had been children during many of the events described and I figured if they survived the actual events, I could handle reading about them. And then, of course, I got wrapped up in the story and read it rather quickly.

Q: How similar are the voyages of discovery that you took to Greece and your character Maya takes to India?

A: Interesting question! Maya's best friend, Heidi (whose real name is Aphrodite) is a Greek-American magazine editor (as I once was), so when I give readings I'm often asked how much Heidi is like me. But several friends who know me well have said that they feel Maya is more like me, and in many ways, they're right. I also returned to my homeland in my 20s to try to lift a family curse (my grandmother had cursed any of her descendants who returned to Greece, the country where she suffered so much). And I too struggled, and continue to struggle, with building one identity while torn between two cultures. Wherever Maya and I are, we're missing a place, and several people, we love. And now I've complicated the issue by marrying a Nicaraguan so I've got another country in the mix, pulling on my heart and overtaxing my schedule! Really, it's an embarrassment of riches, having so many people and places to love. But it's not easy. I think it's a conflict all hyphenated Americans feel, and many of us do take several journeys "home" in our lifetime. It's one of the ways in which I hope Other Waters, while being very specific in setting and circumstance, addresses themes many of us feel.

I'm working on another cross-cultural generational saga. This one is set in New Orleans and Nicaragua, and is told in the voices of an older woman, her daughter, and her adult granddaughter.  I'm very interested in the lives of older women and the changes they've seen in society. I think so many women spend the first half of their lives trying to figure out the rules of the world they live in, and by the time they feel they've got it down, the world has turned upside down and the rules have all changed! That's especially true of Nicaraguan women of a certain age, given the changes in that country in the past century. Plus, I love exploring new territory, geographically speaking. I have written one book set in Europe, a second set in South Asia, and it's next up: Central America.

And I'm still writing articles for various magazines and blogging about contemporary folklore, or, as I like to describe it, "navigating a modern world with the help of time-tested traditions" at theliminalstage.com.

I'm also raising our fifteen-month-old daughter who is an adorable but demanding boss.

A: I think that's it! I'm happy to answer any further questions, or set up Skype dates with book groups, through my website, www.elenigage.com.