Q&A with author John A. Jenkins

John A. Jenkins, the president and publisher emeritus of CQ Press, is the author of three books, including the recently released The Partisan: The Life of William Rehnquist.
Q: What most intrigues you about Chief Justice Rehnquist, and why did you decide to write a biography of him?
A: I’ll answer the last part first:  The short answer is that the job of Chief Justice is one of enormous importance in our tripartite form of government, and that makes him a worthy subject of great historical significance.  It’s a biography that really matters.  In terms of what intrigued me and drew me to him as a subject:  he put up something of a “Do Not Enter” sign around his life.  No memoir, very few interviews, papers not easily accessible.  A journalist’s job is to find out things that people don’t necessarily want us to know.  And I had the only substantive interviews with him – for The New York Times Magazine – that delved into his own views about the Court.  So it was a logical project.
Q: You write, "Rehnquist's judicial philosophy was nihilistic at its core, disrespectful of precedent and dismissive of social, economic, and political institutions that did not comport with his black-and-white view of the world."  What caused you to come to that conclusion, and what are some examples of that philosophy and worldview?
A: That one sentence has received a lot of attention, as I expected it would.  But it’s an inescapable conclusion for anyone who objectively examines the full record of Rehnquist’s life.  Or for anyone who reads The Partisan.  Rehnquist had a view of the world that was flash frozen at childhood.  His world had good guys and bad guys.  He voted against every affirmative-action program the Court ever considered.  He called stare decisis, honoring legal precedent, a “sham.”  Rehnquist came to the Court with a personal agenda to steer it to the right, and he was very direct about that in our interviews.  He was also pretty successful – although, as I write, not as successful as he could have been.
Q: Both your new biography and a 1985 New York Times piece you wrote about Rehnquist are titled "The Partisan."  What do you see as the significance of that title as it relates to Rehnquist and his role on the court, and can you tell us about Rehnquist's reaction to your 1985 article?
A: When the editors at The Times Magazine gave my article that title, they were actually quoting Rehnquist.  He openly acknowledged his partisanship during our interviews.  He was very comfortable with the description.  I thought “Partisan” it was the best possible title for his biography, because that one word really captures him.  When the magazine article first came out, I think he probably thought he’d been accurately portrayed.  But I know he didn’t like the cover photograph, because he told his sister so in a letter the next day.  He did sort of look like an avenging angel in that photo, but I had nothing to do with it!  Later on, particularly during his 1986 confirmation hearings, his comments to me about Plessy and Brown caused him trouble.  By 1996, he was vowing never to give another such interview and citing my article as the reason why. 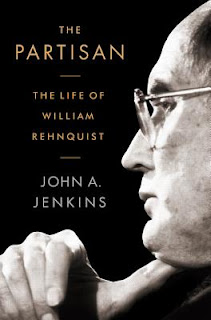 Q:  Which of the current justices would you describe as partisans, and do you see partisanship continuing on the court in the future?
A: I think the Court is comprised now of partisans on both sides, probably to a greater extent than at any time in its history and certainly since academic experts got serious about analyzing the philosophical drift of the Court starting with the administration of FDR.  That is actually Rehnquist’s most potent, enduring legacy.  Yes, it will continue.

Q: What are you working on now?
A: Among other things, another book project about the Court.  Stay tuned.
Q: Anything else we should know?
A: One of the fascinating things I uncovered during my research was the great regard that Rehnquist had for a justice who in many ways was his polar opposite:  Bill Douglas. Rehnquist had made no secret of his disdain for Douglas, going all the way back to Rehnquist’s clerkship at the Court in the early 1950s.  And yet Douglas reached out to young Justice Rehnquist from the day Rehnquist arrived there in 1972.  Both men were rugged individualists, fiercely independent.  Politically, they agreed on almost nothing.  Yet there grew to be genuine affection and mutual regard.  That is my favorite part of the biography.
Interview with Deborah Kalb.