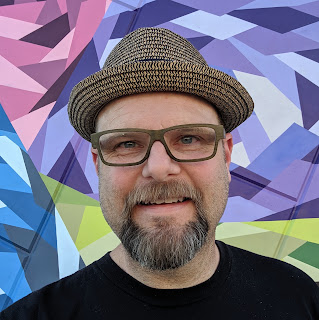 Alan Gratz is the author of the new middle grade graphic novel Captain America: The Ghost Army. His many other books include the middle grade novel Ground Zero. He lives in Asheville, North Carolina.

Q: You write that you've been a big superhero fan since childhood. What inspired the creation of this new graphic novel featuring Captain America?

A: One of my first attempts at getting published—long before I was writing novels for young readers—was schlepping comic book scripts around to show to editors at comic conventions. My career ended up taking a different path—a happy and successful one!—but one that looked like it might take me away from comics forever.

Then I saw that Marvel and Scholastic were teaming up to create superhero graphic novels for middle grade readers, and I saw my chance! But what character should I pitch to them? I immediately thought of Captain America, and his sidekick Bucky Barnes.

Q: Why did you decide to set the story during the World War II era?

A: I've already written a number of books about World War II for middle grade readers—Prisoner B-3087, Projekt 1065, Refugee, Grenade, Allies. That made Cap's World War II exploits a perfect match! And he's so much more famous now for his post-World War II adventures that I felt like it gave me a lot of room to play with his past.

As to why I love writing about World War II, especially for young readers, there's a real clear good-guys and bad-guys aspect to that war. Like, the more you read and learn about Nazi Germany, the worse it is. They had to be stopped. The people and nations of the world sacrificed a lot to do it, but defeating the Nazis was worth it. 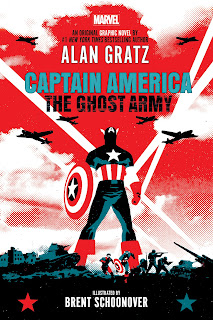 That's the kind of black and white situation I really respond to—and I think middle grade readers do too.

I was also really excited to be able to work in a neat piece of World War II history that I hadn't yet found a way to use in one of my prose novels: the U.S. "Ghost Army." The Ghost Army was a real U.S. WWII unit made up of artists, actors, sound engineers, and advertising professionals.

Their job was to trick the Axis powers into thinking we had more people and equipment than we really had. They created inflatable tanks that looked real from the air, fake radio transmissions that included false information, and audio recordings of troop movements to mislead enemy soldiers.

Q: What do you think of Brent Schoonover's illustrations?

A: They're terrific! Brent has a style that is both modern and classic at the same time. That modernity makes it look natural and realistic, and its classic look gives it sharp, clear lines and a retro comic feel. He's the real hero of this book, because he's somehow able to squeeze in the 20 different things I've written into the back of a panel and still make it look good!

Q: You write, "I love Cap because he's proud to wear the Stars and Stripes, but isn't a rah-rah cheerleader for everything the United States does. Captain America instead represents what we Americans aspire to be: courageous yet humble, just but kind, and steadfastly loyal to our friends and allies." What do you think he stands for in this polarized era?

A: Maybe the hope and vision of America? I don't want to say, "What America once was," because we've always been flawed. The United States has made plenty of mistakes. What country hasn't? There's no way to be perfect.

But Cap is a living, breathing human being who actively embodies one of my favorite Maya Angelou quotes: "Do the best you can until you know better. Then when you know better, do better." I hope that's what our country is, and will continue to be.

A: My next prose novel is called Two Degrees, and is the story of three young people surviving the effects of climate change in the present day: a girl surviving wildfires in the Sierra Nevadas, another girl surviving a hurricane in Miami, and two boys trying to escape a polar bear in Churchill, Manitoba! That book is due out in fall of 2022.

We're also working on a graphic novel version of Refugee, which I'm very excited about!

A: Marvel's been a blast to work with. Right from the start, they encouraged me to connect my story to Marvel comic book continuity in as many ways as I could. So long-time fans will find some Easter eggs in the book.

At the same time, I worked really hard to make sure it was equally fun for someone picking up their first Marvel comic. I hope Captain America: The Ghost Army makes all readers want to go read more Marvel comics!