Alison Hughes is the author of the new young adult novel Hit the Ground Running. Her other books include Lost in the Backyard and Kings of the Court. She lives in Edmonton, Alberta.

Q: How did you come up with the idea for Hit the Ground Running, and for your characters Dee and Eddie?

A: The idea came out of the blue, as we were driving through the US/Canada border crossing on a family holiday back in 2007. Border crossings are one of those highly official places, like the security check at an airport, where even when it’s routine, there’s an element of tension.

The characters evolved over time, like the book (which took about ten years from first draft, through many drafts). Eddie was always Eddie – smart, interesting and odd. At first, Eddie stole the show. But Dee came into her own when I learned to let her humor and uncertainty shine through. 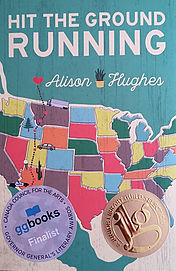 Q: How did you choose the areas your characters would travel through?

A: We made the three-day, round-trip drive from Edmonton, Alberta, to Phoenix, Arizona, several times to visit relatives. So I always knew that was the route Dee and Eddie would take. I took detailed notes on our last trip so the trip was completely accurate (down to the “Got cows? We got bulls!” sign).

Q: This is your first YA novel--was your writing process different this time?

A: I don’t think the writing process was different from the middle grades I’d written. You think, you sit, you write. What was different was that it took a little time getting all the details right – speed limits, residency requirements, highway numbers, etc. I had a long talk with a very nice border services agent who walked me through how they would deal with two unaccompanied minors. 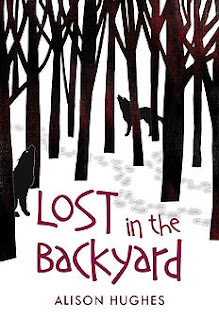 The book was a lesson in perseverance. It took 10 years to develop, because it was one of the first books I’d written. My editor passed on the first draft of it (and she was right), so I left it went on to write and publish a bunch of middle grades and picture books, but always kept this story in the back of my mind. Whenever I started a new project I’d think: “You realize those kids are still on that highway, right?”

So finally I buckled down and rewrote the story, and by that time I was much better at this writing thing, so it came very smoothly. Sometimes you have to listen to that pigheaded little voice inside you that says ‘this is a good story, these are good characters.’

A: I’m glad you said “some”, because children often ask me to pick one and that’s just too difficult. I love all the old classics, like Charlotte Bronte, Jane Austen, and Charles Dickens. I like Zadie Smith and Ian McEwan and J.K. Rowling. And I also love a good murder mystery from writers like Dorothy Sayers, Patricia Wentworth, Ngaio Marsh and Elizabeth Peters. 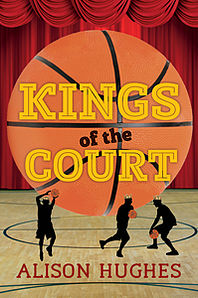 A: A YA novel set in 1969, just when the times were a-changing. I’m also working on two picture books and a middle grade is percolating.

A: Hit the Ground Running was nominated for the 2017 Governor General’s Literary Award! Such an honour for a humble little story of two kids in a car.

I suppose I should also mention that I’ve got three books out in 2018: Kasey & Ivy, about an 11-year-old germaphobe who has to spend a month in the hospital in the geriatric ward (doesn’t sound like a funny premise, but it is), Hide and Shriek, which is a tense thriller about four kids in a hide-and-seek club who witness a criminal deal, and The Cold Little Voice, a picture book targeting self-criticism and self-bullying.

--Interview with Deborah Kalb. Here's a previous Q&A with Alison Hughes.
Posted by Deborah Kalb at 9:43 AM