Yoojin Grace Wuertz is the author of the new novel Everything Belongs To Us. She was born in Seoul, South Korea, moved to the United States when she was 6, and lives in northern New Jersey.

Q: You've said that your inspiration to write this book came, at least in part, from your father's comments about his time at Seoul National University, and that the book became "the bridge between my parents and me." What do your parents think of the novel, and what do you feel you learned about their lives before they arrived in the United States?

A: My parents are thrilled with the book and the reception so far, which means the world to me. I overheard a family friend joke to my mom after my book launch event, “Now you’ll have to write a book about your daughter to tell your side of the story!” and my mom replied, “No, I’m happy with what she wrote. She already wrote my story.”

I should add that the book is fiction and the events pertaining to the characters are made up, but the historical and cultural details of this generation are deeply researched, largely with their help. Perhaps that’s what she meant when she said I told her story.

What I learned about my parents is that they’ve seen more in their lifetimes, and adapted to more changes culturally, economically, socially, politically, than I will likely ever be required to in mine.

Sometimes the transitions were less than smooth, which used to create a lot of conflict between us. Writing this book helped me see what I was missing about their cultural and historical context.

Q: How did you come up with your characters Jisun and Namin?

A: My mom’s story inspired Namin’s character. Like Namin, my mother grew up with financial challenges because her father died of illness when she was just an infant. This was 1954, only a year after the end of the Korean War. Because she was academically talented, my mother took refuge in books and education.

She used to tell me how she felt ashamed of being poor, but when I think of the huge obstacles she’s overcome in her life, I am incredibly proud of her and proud to be her daughter.

Jisun was inspired by a character from an immensely popular Korean television drama series (what we would now call K-drama) from the 1990s called The Sandglass (or sometimes translated The Hourglass). I was 15 years old when this drama aired, and Koreans were obsessed with it.

This was long before Netflix and Youtube, and so Korean-Americans would have to wait until the episode aired in Korea, then it would be taped and mailed to the States, where Korean video shops would make copies and lend them out. There used to be a lot of these immigrant video shops, which have now gone the way of Blockbuster. 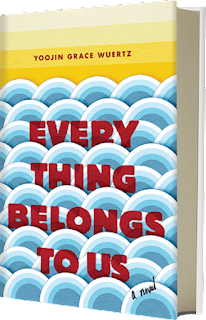 At the time I was too busy with school and too snobby about Korean dramas (which I thought were melodramatic) to actually watch the show, but I knew about it since everyone was talking about it. I knew one of the main characters was an heiress who wanted to be a political activist.

When I started thinking about writing this novel, it was 10 or 12 years after the series had aired, and I remembered this character because my aunt loved the actress. I wanted to create my own version of someone who had been groomed for a life of extreme privilege and decided to forge an opposite path.

So I realized I should go back and watch the show. I watched all 24 hours of it in a couple of weeks. It was tremendous. Melodramatic? For sure.

But Korean history is melodramatic. A tiny peninsula divided by one of the most militarized borders in the world, with superpower allies on either side? There’s really no getting around the melodrama.

A: About halfway through the novel, I realized how it would end. The writing went so much faster after that.

Q: You've noted that you did a lot of research on South Korea in the 1970s. What surprised you most, and what do you think are some of the most common perceptions and misperceptions in the U.S. about recent South Korean history?

A: There were two paradigm-changing realizations. One was that until the mid-1970s, North Korea was actually more prosperous than South Korea. 1974 was the first year that South Korea pulled a higher GDP than the North, and only just barely.

Can you imagine that? In our current reality, it seems like a foregone conclusion that North Korea was always going to suffer under communism, and that South Korea would prosper under capitalism.

But both Koreas were under dictatorships—South Korea didn’t have a true democracy until the late 1980s—and they were in active competition, economically as well as politically, through the postwar/Cold War decades. It was a competition that South Korea was actually losing for many years.

The second realization is related: the so-called “Miracle on the Han,” which describes the economic transformation of South Korea in the 1970s through 1990s is a bit of a misnomer because “miracle” connotes a magical, inexplicable happening.

In reality, the “miracle” was the result of an aggressively engineered push for development by President Park Chung Hee’s administration at the cost of democracy and human rights.

One fact that astounded me is that President Park agreed to send 320,000 troops to the Vietnam War in exchange for billions of dollars of U.S. aid. This was the second largest foreign troop count after the United States. The money earned by these soldiers, as well as the labor of factory workers, often in inhumane conditions, laid the foundation for South Korea’s modern prosperity.

A: I’m working on a novel set in contemporary NJ/NY about an interracial couple—a Korean-American woman and a Caucasian man—who come from very different cultures and have clashing class aspirations. Again, it’s about how intimate relationships fare when issues of class and politics come into play.

I’m hoping it will be funny. At least, I find it funny because I get to write about contemporary Korean-American family dynamics. It’s a totally different lane from the historical voice, and I’m enjoying being a little more casual.

A: Nothing else I can think of! Thank you so much for hosting me on your blog!