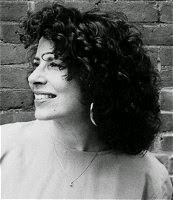 Leslea Newman, prolific author and poet, has written many books for children and adults. Her most recent work is a children's book, Here is the World: A Year of Jewish Holidays.

Q: How did you come up with the idea for your newest book, Here is the World?

A: Originally I wrote the text as a poem to introduce another poet at a reading we were giving together. The poet, Andrea Ayvazian, is a very spiritual, joyful person and I wanted my introduction to emcompass this. The original poem had no Jewish content. When I decided to make it into a children’s book, I thought incorporating the Jewish year enriched the original text. 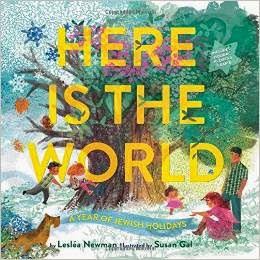 Q: You’ve written for children of various ages, as well as for adults. Do you approach the writing process differently depending on the age you’re writing for, and do you have a preference?

A: To me it’s all the same. Writing is writing. I try to craft the most beautiful piece of literature that I can by writing many, many drafts. I enjoy writing for both children and adults. My favorite thing to write is poetry.

Q: You are very prolific. Are you often working on more than one book at a time?

A: I am always writing poems, while I am writing book manuscripts. And sometimes those poems are compiled into a collection. But otherwise, I am usually writing a new book and editing already written books (the “many many drafts” I refer to in the answer to the previous question) at the same time.

Q: One of your best known books is Heather Has Two Mommies, first published in 1989. How have reactions to that book changed over the past quarter-century?

A: I like to think that we have evolved into a society that is more respectful of diversity during the last 25 years. I think the book is not considered as controversial as it once was. A new edition with brand new illustrations is being released in March 2015 and it will be interesting to see what the response will be.

A: I am working on a children’s book about a young Jewish girl who comes by herself to America in the early 1900s. It is based on a true story of a family member.

A: Yes! I am excited about several forthcoming books:

I Carry My Mother is a book of poetry for adults that explores a daughter’s journey through her mother’s illness and death (Headmistress Press, January 2015)

My Name is Aviva is a children’s book about a Jewish girl who does not like her name and what happens when she decides to change it. (Kar-Ben, August 2015)

Ketzel, the Cat Who Composed is based on the true story of a cat owned by the composer Moshe Cotel who “composed” a piano solo which received a prize (Candlewick, Fall 2015).

--Interview with Deborah Kalb. Leslea Newman will be participating in the Lessans Family Annual Book Festival, held from November 6-16, 2014, at the JCC of Greater Washington.