Erin La Rosa is the author of the new novel For Butter or Worse. Her other books include The Big Redhead Book. She lives in Los Angeles.

Q: What inspired you to write For Butter or Worse, and how did you create your characters Nina and Leo?

A: So many things came together to form For Butter or Worse, but I was mostly interested in writing a female character we don’t see very often. When I was researching and brainstorming, I saw an opportunity to talk about female chefs—only 7 percent of restaurants in America are run by women! And then I thought about a female Gordon Ramsay—someone assertive and no-nonsense, which isn’t what we usually see from women in reality food shows.

And in creating Nina, I really tried to give her qualities that male chefs are encouraged to have (confident, outspoken, and dominant), but we don't see as often in famous female chefs. She became the grumpy of the grumpy-sunshine romance trope, which I really liked.

Whereas I wanted Leo to be a bit of a playful playboy who, underneath, was really dealing with complex mental health issues and used his fake-confidence as a mask. He’s definitely a cinnamon roll hero (secretly sweet on the inside).

Q: Why did you decide to focus on the world of food in the novel?

A: Like so many people, food is a comfort for me, and cooking brings me a lot of calm. I know some people cannot or do not want to cook, but I find it therapeutic to follow a recipe and always come out with a delicious result (most of the time). 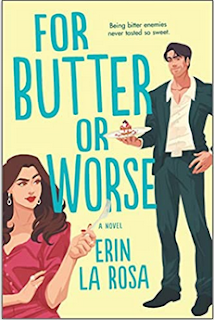 And the food scene in Los Angeles is so fun and unique, so it was a delight to kind of do a food tour through the book. I was able to highlight local restaurants I love (Uovo is pasta perfection, and n/naka is out of this world brilliant), while getting to taste test their food too. This book was a real pleasure to write, obviously.

A: The great thing about romance is you know there’s going to be a happily ever after, so I had that target to hit. I also knew that I didn’t want everything to magically fix itself, so I wanted (without spoiling the book) for Nina to have to rebuild her career in a very real way.

I didn’t know how I wanted Leo’s ending to go until I started writing his character, and then I naturally realized that I needed him to deal with his mental health and show that as part of the ending. So for Nina, I always knew where I wanted her to go, and Leo I discovered as I wrote.

Q: You've also written two works of nonfiction--do you have a preference between writing fiction and nonfiction?

A: I have written two nonfiction titles—Womanskills and The Big Redhead Book, which are both humorous and rooted in research—and it's such a different experience to write fiction. With nonfiction, I had the luxury of doing research to help inform my writing, whereas with fiction, I truly felt like I was creating a new world.

I found that developing characters and their arcs was more creatively satisfying, and that's ultimately where I want to live. But I can't deny that I just adore talking to fellow redheads about all of the redhead facts I dug up through writing that book... There's a lot to love about both genres!

A: Books operate super far in advance, and I feel something I'm learning is that making a career as an author is a bit of a juggling act. So, I'm currently doing a ton of marketing and social for For Butter or Worse, but I also wrote a second romance book for Harlequin, and we're doing edits on that book, which should come out in 2023.

On top of that, I'm currently working on fleshing out ideas for a third book. So I'm working on a few books at once, and I expect that pattern will just kind of continue!

A: I absolutely love talking to readers and getting to hear their thoughts on the books I write, but also to aspiring authors, so please do follow me on social and reach out! You can find me on Instagram, Twitter, and TikTok!