Josh Swiller is the author of the new young adult novel Bright Shining World. He also has written the memoir The Unheard. He lives in upstate New York.

Q: How did you come up with the idea for Bright Shining World, and for your character Wallace?

A: I was a serious meditation practitioner for many years and had been pondering for a long time how to get the healing perspective of meditation (which is about the end of drama) into a novel (which is all about drama!). Got nowhere for years. Began to think it was impossible. One day it just came to me.

A: I actually had the first line and the last line before I started. I knew the journey I wanted Wallace to take. And in some respects, this made writing the book harder. Sometimes it’s better not to know. But I was truly curious about his journey, about how he would get to the end, and I think this curiosity and excitement comes across. 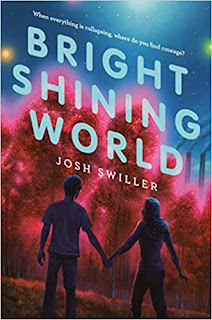 Q: Would you describe the book as science fiction, or as a mix of genres?

A: I think it is an eclectic mix. There’s sci-fi, it’s also apparently an eco-thriller, which is a genre I was not aware of until a few months ago. There’s also romance and aspects of a high school coming of age novel (bullies! Keg parties!). And I love humor and tried to work that in. But ultimately I think of it as a deeply spiritual book, about finding the still clarity beneath all the noise.

A: To understand that to save the world we have to cherish it. Securing the future is not just about fighting but about appreciating. And that the magic of the natural world isn’t something that’s only for ancient cultures or faraway mystical places but is available to us right here and right now.

A: I actually finished a novel about deafness (I am completely deaf) that I am finding a home for. And am at work on the early stages of another novel. One thing meditation practice teaches is you is how to get up early, whether you want to or not; I find those early morning hours a great time to write.

A: I’ve come to believe we feel hope not because the world has proven itself worthy of it but because to hope is our natural state. I try to honor that and to not fall into cynicism or despair. We’ve got a lot to do, a lot is being put on the younger generations, and we, and they, have to have hope. My wish for Bright Shining World is that it might assist in that.