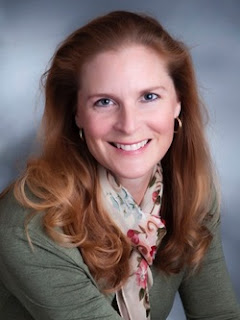 Karen Odden is the author of the new historical novel A Dangerous Duet. She also has written the novel A Lady in the Smoke. She has taught at the University of Wisconsin and the University of Michigan, and she lives in Scottsdale, Arizona.

Q: You've noted that your father was a pianist. How did you end up creating your character Nell, a pianist in 19th-century London?

A: There’s not a tidy answer to that one, honestly. I’d say the impulse came from a few different strands of thought and memory.

First, my father was a fine pianist, and so piano was always part of my life as a child. After he died in 2012, it sharpened my memories of him playing piano in our living room.

We had a goldenrod carpet (it was the ‘70s) and sometimes I would lie underneath the piano, listening to the disembodied notes coming through the air, and watching my father’s feet in their Hush Puppies as they moved among the three pedals.

I wasn’t ever close to my father, who was rather a loner, engaged in collecting model cars and trains, reading his books, and photographing the sights he saw on trips he took alone.

But after his death, which stemmed from his Type 1 diabetes, I realized that his diabetes in many ways shaped and defined his childhood; while his older brothers could play football and baseball, my father couldn’t, and so piano became his companion, and music a significant way of communicating.

This suggested to me some ways that my heroine Nell’s interactions with the piano might be shaped by her early childhood.

Second, my son plays piano now, and people who knew my father when he was a young man are amazed—because my father and my son have mannerisms, down to the tilt of their heads as they read music, that are exactly same, although my son has never spent any significant time with his grandfather.

This raised the questions for me of just how much musical talent is hardwired into the brain, and what can be inherited.

Finally, years ago when I was researching for the introduction to Charles Dickens’s Hard Times, I read a piece about his older sister Fanny Dickens, an extraordinary pianist who attended the Royal Academy of Music in London in the 1820s. 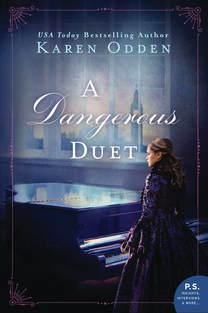 She was forced to leave, however, because her spendthrift father was thrown into debtor’s prison, and she could no longer pay tuition. Eventually, she was allowed back, earning her way by teaching piano to younger students.

But it raised the question for me: What would a woman in 1870s London do if she desperately wanted to go to the Academy and didn’t have money for tuition?

On a visit to London, I went to the Academy (where I found a class list with Fanny Dickens’s name written in fading ink on a foxed page—so evocative!) and to Wilton’s Music Hall, the last Victorian music hall still standing.

When I researched music halls further, I realized my protagonist could be an accompanist—and Nell Hallam’s story began to take shape in my head.

Q: You also focused on the 1870s in your first novel, A Lady in the Smoke. What intrigues you about that time period?

A: Back in 2001, I wrote my dissertation on Victorian railway crashes as they appeared in novels, newspaper articles, parliamentary papers, medical treatises, cartoons, and so on, from about 1840 to 1890.

As I did my research I realized the 1870s were a time of explosive change, propelled into the air by the rising literacy and a growing number of newspapers and pamphlets, and then anchored to the earth by decisions being made in the law courts and in parliament.

For example, the second Reform Bill of 1867 extended the vote to working-class men; the Married Women’s Property Act of 1870 allowed a married woman, for the first time, to retain control over money she had earned; the Elementary Education Act of 1870 was the first step toward making education mandatory for all children.

It was also a time when Scotland Yard was still in its infancy—and many people were suspicious of policemen who could “cloak their misdeed in their plainclothes.”

So it was a time of extraordinary shifts in ways of thinking about gender and class, childhood and families, trust and the law—all of which are themes I enjoy exploring in my books. 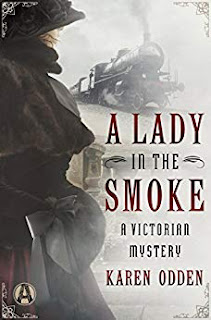 A: I know generally that I’m writing toward particular kinds of resolution—that is, the heroine has to learn something and change her behavior as a result of facing her past and understanding its meaning for her present; usually I also want her to find a new friend or a romance and something more for herself (i.e. a career, a new perspective on her passion).

I know that the back-story, rooted in family unhappiness, has to be uncovered, and the original act of violence (the attack on Nell’s friend Marceline, for example) explained.

But, yes, the book changes along the way: this novel actually began as “The Phrenologist’s Daughter,” with Nell viewing her con-artist father askance, as he read people’s skulls for money.

In a subsequent version, her father was a doctor who specialized in mental diseases, and his best friend was a detective. Still later, I killed off the father and made the detective figure her brother Matthew, so he’d be at the breakfast table with her, to draw the stakes of solving the mystery closer to home for both of them.

A: Tana French, for her intensity. She can get characters’ feelings on the page and hold them there as well as anyone I know.

And for nonfiction, Atul Gawande and Brené Brown, whose books are full of compassion and wisdom.

A: My next book, A Trace of Deceit, concerns Annabel Rowe, a young woman painter at the Slade Art School in London, in 1875. Her older brother Edwin, a brilliant painter and a former forger, is murdered, and a valuable French painting is stolen out of his studio.

Being Edwin’s closest relative and acquainted with the art world, Annabel offers Scotland Yard Inspector Matthew Hallam (Nell’s brother from A Dangerous Duet) her help in an investigation that exposes secrets from Edwin’s past and the darker side of the London auction world.

A: On March 2-3, at the wonderful Tucson Book Festival, I’ll be speaking with Donis Casey (author of The Old Buzzard Had It Coming and other mysteries) on writing historical mysteries. Our panel is on Saturday at 2:30 pm, and I would love to see people interested in historical fiction there.

For people interested in the Victorian period in particular, please visit my website for blogs about Victorian music halls, women pianists, and the seedier side of 1870s London generally.

Like many authors on this blog, I want to encourage people to reach out to the authors whose books they enjoy; I love to hear from readers, so on my website, please click on the “Stay in Touch” tab to be added to my mailing list!