Amanda Sthers is the author of the novel Holy Lands. She is a playwright, screenwriter, and director, in addition to having written 10 novels. She was born in Paris and lives in Los Angeles.

Q: How did you come up with the idea for the Rosenmerck family, and why did you decide to write their story as an epistolary novel?

A: I read an article in a very serious French newspaper explaining how to raise pigs in Israel. For once, Muslims and Jews were agreeing on something or more precisely against the same thing.  I found the paradox hilarious; it was the starting point.

Then, I wanted a metaphor on what is happening between Israelis and Palestinians. At the end it’s a big family affair. How can you fix a broken family?

I felt that letters will give a sense of immediate promiscuity and help us enter in a very personal story. Also, in a dysfunctional family like the one I am describing, silences are as important as words and only letters could give this feeling. I think we all instinctively hear what is left unsaid. 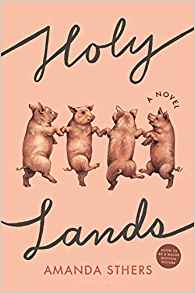 Q: You tell the story from various characters' perspectives. Did you write the novel in the order in which it appears, or did you focus more on one character and then on another?

A: Like I do in most of my work, I started at the end. I always write for the last words… The last emotion…. My destination. Then I write the beginning… I amused myself to answer to the characters being one after another… I wrote the letters almost in the same order that it appears at the end. But I had a very clear idea of the trajectory of each one of the family members.

A: It was hard to find a title as there are so many subjects in this book, but “Holy Lands” made sense because we are all looking for ours:  the skin of our lover, the place where we were born, we all have a promised place where we want to end up and all those contradictions are crystallized in the land of Israel that everyone fights about: we all want a piece of a dream.

Q: You're also a screenwriter, playwright, and director. Do you have a favorite form of creative expression?

A: I love telling stories and I try to keep it all very playful but writing is how I started and is my only necessity.

A: I am writing another novel, as always…. And adapting one of my previous novels, Promises, soon to be a motion picture…

A: Yes, but it takes time. Can I take you out for lunch?