Laurel Davis Huber is the author of the new novel The Velveteen Daughter, which focuses on Margery Williams, author of The Velveteen Rabbit, and her daughter, artist Pamela Bianco. She has worked as a teacher, a communications director, and a development officer, and she lives in New Jersey and Maine.

Q: How did you come up with the idea for The Velveteen Daughter?

A: The idea was triggered one morning in 2006 when I was procrastinating, doing just about anything except work on whatever project was at hand.

Idly, I picked up an old childhood book I’d always loved because of its beautiful illustrations. It was an ABC book by Pamela Bianco. After I read the book, I promptly Googled Bianco’s name thinking I might find other books she had written and illustrated. (Yes! More procrastination!)

One of the first links that appeared was to a Bianco print for sale—the description mentioned that the artist had been a world famous child prodigy at the turn of the century. Intrigued, I continued Googling, and soon became obsessed.

It wasn’t until much later that I discovered that her mother was Margery Williams, author of The Velveteen Rabbit. By then I was beyond obsessed. Nobody knew this story! And the years of research and writing began.

A: Getting this right was critical to me. The more I researched and got to know the people involved, the more I determined to stick to the truth as much as possible. 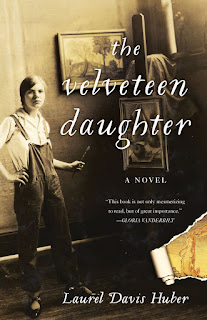 I had no desire to make up scenes just to add drama to the story if they were wholly fictional. Which meant that my job was to take the facts and embroider them in a way that was as dramatic—as novelistic—as possible. There is a lot of dialogue in the book, and of course most of that I had to invent.

Still, there is very little in the novel that is not based on facts gleaned from books, newspaper and magazine articles, personal letters, and interviews (I was lucky to meet with Pamela’s daughter-in-law).

Q: What sort of research did you do to write the book?

A: The short answer is – fun research! I loved everything about the research. There was quite a bit that was done online, of course.

That was fascinating, but couldn’t compare to the sheer adventure of road trips to libraries and special collections at places like the New York Public Library, Columbia University, Vassar College, and Lilly Library in Indiana, to name just a few.

Q: How did you decide on the novel’s structure and the order in which it unfolds?

A: The answer to that would take a novella to explain. The truth is, and I am sure it’s the same for many novelists, is that the book had a painfully long evolution.

The very first version I wrote was called White Blossom, Black Garnet and focused solely on Pamela. Margery was a minor character.

From there the story gets tangled—suffice it to say that I re-wrote the entire novel at least four or five times. The re-workings were all based on a combination of my reactions to reader comments, my intuition, and agent suggestions.

The idea for final version occurred to me in 2014, when I thought I’d rather commit hara-kiri than re-write the book one more time.

There was a lot of juggling to do to ensure that the reader could follow the different threads of the story. But it became like a puzzle, and it was a great challenge to keep rearranging the pieces to fit.

A: I have written almost 100 pages of a novel that is probably the polar opposite of The Velveteen Daughter in every way. It’s contemporary, it’s a work of magical realism, and the protagonists are a woman and her dog. Hmm…we will see what happens with that one!

A: The negative: I can’t cook. Plants die if they happen to be anywhere near me.

The positive: I’m pretty good at doing the New York Times crossword puzzles. I have taken long walks every day for the last twenty years—it’s healthy, of course, but I’ve also found it’s rather amazing in the “inspiration” department.

The miscellaneous: I love Maine. I also love dogs but don’t have one at the moment.