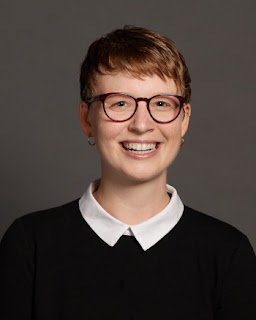 Molly Booth is the author of the new young adult novel Saving Hamlet, in which a modern-day teenager goes back to Shakespeare's time. Her work has appeared in a variety of publications, including McSweeney's and The Mary Sue. She lives in Boston.

Q: How did you come up with the idea for Saving Hamlet, and for your main character, Emma?

A: The idea for Saving Hamlet came to me when I was taking a Shakespeare course in college, at the same time as I was yearning to try writing longer fiction.

I’d only written shorter stories, usually about awkward encounters I’d had with crushes, but I was bad at coming up with satisfactory endings. I had this gut feeling that I needed to try writing something longer, but I was scared to.

Then, in the Shakespeare class I was taking, I latched on to the historical aspect of studying Shakespeare -- the Globe, the fast-paced rehearsals. I had been a theatre techie in high school, so I loved the idea of this intense backstage.

I wanted to be there, so badly, so I sent a character there instead. I meant to write a longer short story, but then it became a novella, and eventually, a full-length novel. In many ways, I learned how to write with Saving Hamlet.

The premise for Saving Hamlet came to me before Emma did: I wanted a teenage stage manager who would time travel back to The Globe. Emma kind of announced herself to me in that first chapter, the scene with the haircut.

She was newer to theatre, and she’d just upheaved her school life and social circle. And she was trying, and often failing, to understand the people around her, and how she fit in. It all happened kind of unconsciously, but I certainly drew on aspects of my own teenage experiences.

Q: You note in an afterword, "I wanted to take Shakespeare and London's history, bring it alive, and make it relevant to our world today." What are some of the ways in which Shakespeare, and particularly Hamlet, remain relevant today? 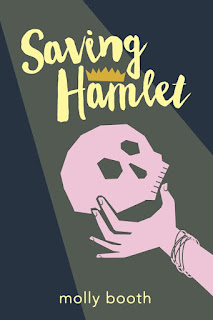 A: In terms of history, I wanted to connect Shakespearean theatre from the 1600s to modern theatre, be it professional, community, high school, etc. I wanted to put Shakespeare’s play in its thrilling original context, and show how the passion for this art form still exists today, as long as we care about it.

In terms of his works, and why we care about them, I feel that Shakespeare’s greatness comes from his ability to tap into our minds. His language gets at what people think and feel more beautifully and accurately than anything I’ve ever read. When I first read Hamlet, these words jumped out at me:

“Thus conscience does make cowards of us all;
And thus the native hue of resolution
Is sicklied o’er with the pale cast of thought”

Hamlet is so aware that he’s stuck in these impossible choices. I think his confusion is relatable for anybody, but particularly for young people, who are trying to make tough choices and define themselves.

A: I read so much about the Chamberlain’s Men and Elizabethan England. For me, to create a fictional account of that space, I felt I needed to know as much as possible about the original.

I also took a trip to London with my Marlboro College professor, Paul Nelsen, to visit historical sites, and most importantly, see shows at Shakespeare’s Globe, the recreated theatre. That was a transformative, magical trip.

I was surprised to discover, through the research and through that trip, that no amount of research I did could truly paint the picture of that time period for me.

It sounds silly, but it took that trip to the Globe to realize that Saving Hamlet’s Elizabethan England was solely my job, my responsibility. I had to paint the picture, and there was no way it was going to be 100 percent historically accurate.

A: I did not know how it was going to end. I rarely know the plot of the story I’m working on beforehand -- I usually find it while I’m writing. However, I usually do have a vague vision of a scene from the end. It’s usually a pretty blurry idea, but I try to trust that when I get there, I’ll be able to see it more clearly.

With Saving Hamlet, I envisioned Emma lying on the floor of the lighting booth, staring up at the electrical cords like they were stars, having some kind of philosophical moment. That’s pretty much all I knew about the end of the book before I began.

A: Right now I’m about to embark on my fourth draft of Nothing Happened, my second book, which will be published spring 2018 (also from Disney Hyperion).

It’s a YA novel adaptation of Shakespeare’s classic rom com, Much Ado About Nothing. It’s multiple perspective, set at summer camp, and stars the cast of Much Ado as teenage camp counselors. I had the idea just as I was finishing my third draft of Saving Hamlet.

Like with my first book, and high school theatre, I’m drawing on a setting I love -- I worked as a camp counselor and teacher for many years, and those summers were always so much fun and so dramatic.

I had a lot of different crushes and feelings and bizarre social situations occur, much like in the original Much Ado. It’s kind of like a 300+ page Shakespeare fan fiction xD. I can’t wait for readers to meet this cast of characters! I’ve been working with them for a while now, and I adore them all.

When I’m not working on that, I’m writing papers for graduate school (I’m an English MA candidate), and developing a couple of new book ideas that probably relate to Shakespeare.