Marilyn Singer's many books for children include Echo Echo, Mirror Mirror, Follow Follow, and the forthcoming Feel the Beat. She lives in Brooklyn and in Washington, Connecticut.

Q: Echo Echo is the third of your books of reverso poems. How did you come up with the idea originally, and why did you choose to focus on Greek myths this time?

A: For readers who haven’t encountered it, the reverso is a poem with two halves. The second half reverses the lines of the first half, with changes only in punctuation and capitalization. That second part has to say something completely different from the first. 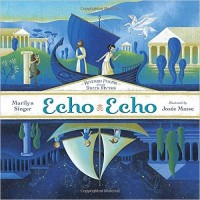 Reversos work particularly well based on narratives and as such fall into three categories which feature either:  1) one character with two POVs; 2) one character at two points in time; 3) two characters, usually with opposing POVs.

My first two books of reversos were based on fairy tales, which have strong stories, so I could make them fit into one of the above categories.  Greek myths also have multi-layered narratives, and they are taught in school.  In addition, I’ve always loved them, and so do most students.  It was a natural extension to go from fairy tales to myths.

Q: One of the poems deals with Pandora's box. Why did you select that particular tale, and how does this set of poems reflect the two sides of the story?

A: Pandora’s Box is such a popular and beguiling myth that I had to use it. In the first half of my poem, Pandora, as is typical, is blamed for loosing evils into the world. 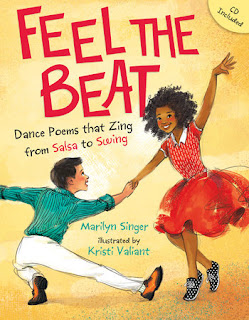 But I always found it somewhat troubling that the poor young woman has always taken the rap.  So the second half is more sympathetic—she may be curious and weak, but she didn’t collect those evils and she might well be a pawn of the gods.

Q: You have a new book of poems coming out this spring, Feel the Beat!: Dance Poems That Zing from Salsa to Swing. Why did you decide to focus on poems relating to dance, and what do you see as the intersection between dance and poetry?

A: My husband and I have been taking social dance lessons for over 12 years, particularly in swing, ballroom, and Latin dance. For a while I’ve wanted to feature those dances in poems.

One day I decided to challenge myself—something I like to do—and write the poems in the rhythms of the dances. Poetry, of course, is also rhythmic—dancerly, if you like—so it made sense to feature dances in poems.

There is a CD which accompanies the book and on it I read the poems over music, adding another layer to the work. The wonderful illustrations are by Kristi Valiant, who is also a swing dancer.  Lots of zing all around! 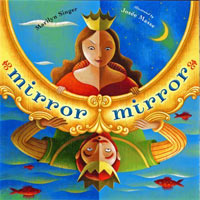 Q: You've written many books--do you usually work on one at a time, or do you have several going on at once?

A: Sometimes I work on more than one at a time, especially if I need a breather from a genre. More typically, however, I do revisions (generally based on editorial comments) on one book while I’m writing a new book.

A: Besides revisions?  ;-)  I’m writing a middle grade novel which is a ghost story and I’m about to start on a collection of poems about presidential pets, which will be published by Disney-Hyperion. 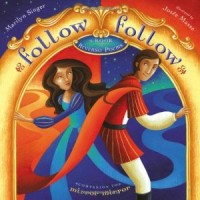 A: Besides Feel the Beat!, I have a collection of poems about global New Year celebrations, Every Month’s a New Year, coming out this fall from Lee & Low and illustrated by Susan L. Roth.

And among my books next year will be Have You Heard about Lady Bird?, poems about the First Ladies, which will be published by Disney-Hyperion and illustrated by Nancy Carpenter, and I’m the Big One Now, poems about seminal experiences for five- and six-year-olds, from Wordsong/Boyds Mills Press, illustrated by Jana Christy.

--Interview with Deborah Kalb. Echo Echo is illustrated by Josée Masse, and both it and Feel the Beat are published by Dial.