Catherine Fletcher is the author of the new biography The Black Prince of Florence: The Spectacular Life and Treacherous World of Alessandro de' Medici. She also has written The Divorce of Henry VIII and Diplomacy in Renaissance Rome. She teaches History and Heritage at Swansea University in England.

Q: Why did you decide to write a book about Alessandro de' Medici?

A: I came across Alessandro’s story when I was writing my first book, about Henry VIII’s divorce from Catherine of Aragon. The pope who turned down Henry’s divorce was Clement VII, head of the Medici family, and he refused Henry in part because he wanted the support of Catherine’s relatives to get Alessandro into power in Florence.

A few years later, thinking about what to write next, I came back to it. It’s a fascinating piece of history, and the stories about Alessandro’s race (he was illegitimate, said to be the son of a Medici duke and a “half-Negro” woman) help lead into a different perspective on the Italian Renaissance from the traditional image of “dead white men.” 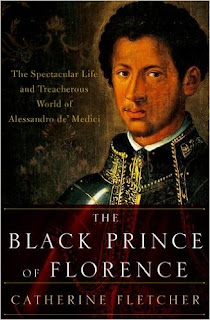 Q: You write, "For centuries after Alessandro's assassination, it suited both former allies and enemies to make a villain of him." Why was this, and what are some of the most common perceptions and misperceptions about him?

A: Alessandro was the first of the Medici family to rule the city of Florence as its duke rather than as “first among equals” in a republican government.

That was a controversial change of regime, achieved with the support of foreign troops, and not surprisingly it made him enemies. Some of them made very personalized accusations about Alessandro’s own behavior – that he was a womanizer, that he abused his power to persecute political opponents, and so forth.

In the 19th century those stories got tangled up with the rumor that Alessandro’s mother was of African descent into a racist account of Alessandro’s bad character. I’ve tried to disentangle the question of what Alessandro was like as an individual from the activities of his regime, because I think we need to look at those two things separately.

Q: What role do you see racial issues playing in his life? 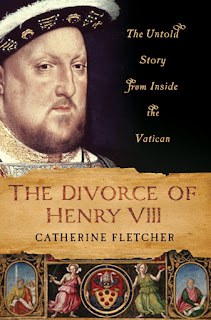 A: In Alessandro’s own lifetime there’s very little reference to race: the idea that someone of mixed African and European descent is racialized as “black” is modern and didn’t really exist in the early 16th century. I haven’t found evidence that his contemporaries saw him in that way.

However, they did talk about his illegitimacy, and his mother’s status as a slave, and some of them argued that made him unfit to rule the city of Florence.

A: I spent most of one summer reading manuscripts in Italian archives and followed up with a few shorter trips. One of my best finds was Alessandro’s wardrobe accounts, which tell us all sorts of things about his dress, furnishings and courtiers.

I read letters, family memoirs, a wonderful complaint from a teenage Catherine de’ Medici (future queen of France) that she hadn’t got a promised pony, and some filthy satirical poetry. 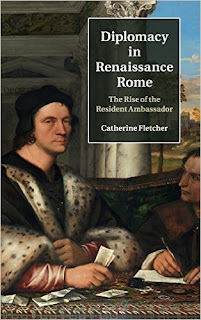 I also read a lot of books by other people on related topics. The thing that surprised (and disappointed) me most was just how pernicious the racist stereotype of Alessandro was: I found it repeated in history books right up until the late 20th century.

A: I’m playing around with a few things. I’m tempted to write a novel to fill in some of the gaps in this story that I couldn’t fill with historical research (so many documents are lost that there’s plenty of space to imagine).

I have a new academic research project on the early history of handguns in Italy.

And I’m planning a new history book, with the idea of taking a broader view of this whole period. Watch this space!