Q: How did you select the letters that appear in the new book?

A: The Wilder letters are scattered widely. Many are in the collections of the museums set up at the book sites of the Little House stories. Some are in private collections. Universities and libraries hold scattered correspondence.

The bulk of the Wilder papers--including most of Laura Ingalls Wilder's letters---are at the Herbert Hoover Presidential Library in West Branch, Iowa.

Q: You’ve studied Laura Ingalls Wilder for many years. Did anything in these letters particularly surprise you?

A: Since I had read and quotes from many of these letters in the process of doing books like Laura Ingalls Wilder: A Biography, I was already quite familiar with them. This aided in organizing and selecting the letters when I planned the compendium of correspondence. 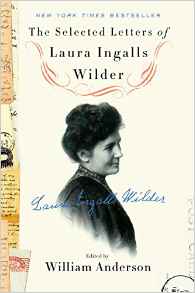 Q: What are some of the themes that you see running through the letters?

A: I see that Wilder was an astute businesswoman, dealing with her agent and publishers. She was likely coached at first in this regard by her daughter Rose Wilder Lane. Lane was an old pro in the publishing world when Wilder first started publishing books.

In her letters to her husband Almanzo, the reader senses the deep love and companionship between the two.

And in her letters to multitudes of readers, Wilder was consistently cordial and warm-hearted in replying to fans.

A: I am working on several non-fiction picture books for young readers.

A: The Selected Letters of Laura Ingalls Wilder is now on an excellently produced audio from Harper Audio.