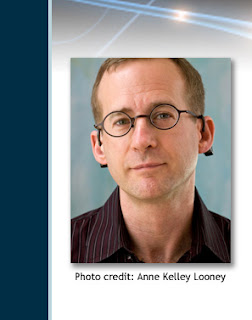 Michael Chorost is the author of Rebuilt: How Becoming Part Computer Made Me More Human, which focused on the changes in his life after he received a cochlear implant, and World Wide Mind: The Coming Integration of Humanity, Machines, and the Internet. He lives in Washington, D.C.
Q: You have written, "My two implants make me irreversibly computational, a living example of the integration of humans and computers." How closely do you think humans and computers are already connected, and how much more connected do you think they can become?
A: That is from my first book, Rebuilt. Right now they’re connected in the sense that we spend all our lives around computers. Most people I know never get more than five feet away from their iPhone, ever.
I’ve gone rather further than that in actually having chips surgically installed in my head that send data directly to my auditory nerve. A surgeon inserted sixteen electrodes into my inner ear that fire my auditory nerves. There’s a gadget I wear on my ear that takes in sound, digitizes it, and sends it by radio to an implanted chip in my skull. The chip figures out how to parcel the binary data to my sixteen electrodes, and I get an experience that is sort of like hearing.
People have seen this as a harbinger of the day where everyone has implants that enhance their brains or senses. But I think it’s important to make a distinction between prosthetic implants and enhancement implants.
Prosthetic implants are what I have. I need them because I’m deaf. They required surgery, which is always risky, but for me the risk-to-reward ratio was very high: low risk, very high reward.
Enhancement implants are a different story. No one knows what the rewards would be, and the risks would not be zero. One thing I learned from getting a cochlear implant is how complex and unpredictable the body is, and that makes me wary of bold predictions.  I’m not saying it won’t happen, I’m just saying that it’s very far off.
Having said that, in my second book, World Wide Mind: The Coming Integration of Humanity, Computers, and the Internet, I took on the role of technofuturist. I wrote about implants that could, in theory, someday, allow the sense-impressions and feelings of one person to be transmitted directly to the brain of another person, or even more profoundly, to groups of other people. A kind of collective awareness, or telepathy. 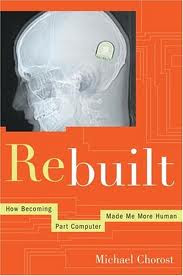 The point was that the real future of implanted devices isn’t going to be to enhance our existing abilities, but to let us do new things entirely. That’s always been the deal with technology: it creates new ways of doing things. Telephones, email, and Facebook don’t really let us do the old ways better. They open up entirely new ways of communicating. I see that pattern continuing someday with implanted technologies, once the risk-to-reward ratio becomes favorable.
Q: Part of World Wide Mind deals with how you met your wife. What do you see as a good balance between being connected to technology and having links to other people? How can someone find the balance that's right for them?
A: There must have been fifty books published in the last few years about how addictive Internet technologies have become, with people worrying that they are distorting and harming human relationships. It’s easy to be afraid of harms we already know about, while not seeing the benefits that we presently can’t yet imagine.
In World Wide Mind I tried to offer a visionary but also more balanced view of the future. The “telepathy” I talk about in World Wide Mind could be like what we have now, only a hundred times more compelling and addictive. What do we do about that?
In the book I interwove the technology with a story of teaching myself to connect better with people face-to-face. I wrote about going to workshops in Northern California where people would do exercises like looking into each other’s eyes and listening without interrupting. Very basic stuff. However, these are skills usually aren’t taught. We just assume people are good at them, where in fact often they aren’t.
In the book, I juxtaposed the high-tech, low-touch future of a World Wide Mind with the high-touch, low-tech present of the workshops: I thought it was a heady, provocative combination. 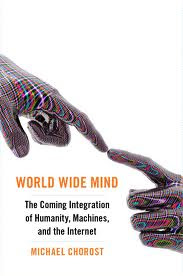 I argued that we need to develop transformative new technologies and teach ourselves the skills of compassion, listening, and being present in one’s body. To get a future worth living in, you have to do both. There isn’t any shortcut. You just have do the hard work of being human.
Q: How has the cochlear implant changed your life, and would you recommend them to other people in your situation?
A: If cochlear implants didn’t exist I would have had to try to learn sign language and join the signing deaf community. Nothing against it, but it’s a completely different world, with its own language and cultural life.
I wanted to stay in the hearing world I’d grown up in, so cochlear implants were the obvious choice. They’ve given me back the partial hearing they used to have – I actually hear better with them than I did with hearing aids.
Before, I could hear a clock ticking maybe five feet away.  Now, it’s twenty or thirty feet.  It feels like my arms are five times longer than they used to be.
Everything sounded very weird, of course. When the implant was first turned on, “What did you have for breakfast?” sounded to me like “Zzzzzz szz szvizzz ur brfzzzzzz.”  Teapots sounded like foghorns instead of whistles.  My own voice sounded either squeakier or hollower, depending on what software I was using.  Paper made bell-like sounds when I rattled it.  I’ve adapted to it, but it’s still strange.
I would recommend them to two groups of people: (a) adults who have had hearing for most of their lives, and (b) children. I would not recommend them to adults who have never used a spoken language, because in that case the brain doesn’t know how to hear, and it’s usually too late to start. Implants rarely enable such users to become skilled in hearing a spoken language.
Cochlear implants are not for everyone, and it’s up to the medical team and the patient to make a well-informed decision. In my case the choice was an obvious yes, because I’d used hearing aids since 3½, had grown up as an oral deaf person, and was skilled with spoken language.
Q: How much time in a typical day do you spend on the computer or other devices?
A: Too much.
Q: What are you working on now?
A: I’d love to write a book on the Search for Extraterrestrial Intelligence, and I’m writing a book proposal for it now. Whether my agent will be able to sell it to a publisher, that’s anyone’s guess.
--Interview with Deborah Kalb. Michael Chorost is on Twitter @MikeChorost
Posted by Deborah Kalb at 9:59 AM