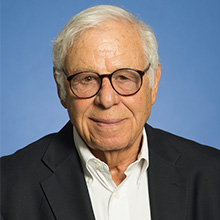 Amitai Etzioni is the author of the new book Foreign Policy: Thinking Outside the Box. His many other books include How Patriotic is the Patriot Act? and Security First. He is University Professor and Professor of International Affairs and director of the Institute for Communitarian Studies at The George Washington University's Elliott School of International Affairs.

Q: Your new book is titled Foreign Policy: Thinking Outside the Box. Why do you think many policymakers are boxed in, and what are some examples of the ramifications?

A: The best example is the foreign policy followed in Cuba. Everybody agrees for 50 years we did the same thing with minor modifications…

With China, we tried to isolate it, and it worked a little better when we tried to engage.

First there’s the ego issue. When you identify the right policy, your ego is on the line—status and prestige. Second, [the policy] generates a political constituency…Somebody makes money off the policy. Often it’s a combination of reasons that all make us stick to the same [thing]. There was a higher cost in Iraq and Afghanistan… 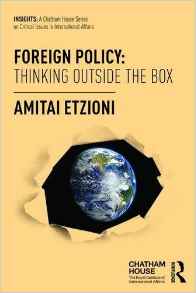 Q: Looking at Iraq and Afghanistan as possible examples, what are some of the ways you urge decisionmakers to think outside the box?

A: Let’s [also] take Libya and Syria. In all four cases, there was one reason we are there. We stayed in Iraq and Afghanistan to turn them into liberal democracies with human rights, freedom of religion, [to become] stable allies.

We have long believed [other areas] in the world want our kind of regime and if they don’t they need a kick in the pants…We have that theory that we spend a huge amount, close to half a trillion dollars, trying to make Iraq and Afghanistan into democracies, and they’re not…ready. We didn’t lose the war, we lost the peace.

In Afghanistan, we insisted that 25 percent of the legislature had to be women. It was alien to their religion and tradition. They were not at that stage in their development.

Many hundreds of thousands of people died in Iraq since it was liberated. We sent the Iraqi Army home; it all backfired.

[In Libya] as the rebels were marching from Benghazi to Tripoli, Qaddafi suggested [a split] between the rebels and Qaddafi. The rebels were not democratic or liberal. They were committing the same atrocities Qaddafi was accused of. The U.S. said, We will not accept this, we want regime change.

In Syria, it’s very complicated. One factor is every time for the first four years the United States stated as a precondition for negotiations that Assad had to go. You can’t negotiate with somebody if the first condition is that you have to go. It’s an example of our idea to democratize the world if they want it or not. 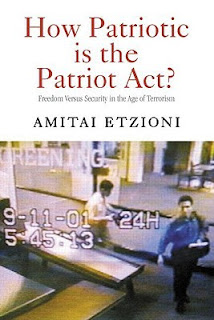 Q: One of the foreign policy issues you write about is China. How would you advise U.S. officials to change their approach to China?

A: First we need to notice the very long history of things where China and we want the same thing. Stopping the proliferation of nuclear weapons. Stopping piracy on the high seas. There are surprisingly few on which we differ. They say we want an island…If we step back and ask what China wants most, it’s clearly not some rocks that may or may not belong to the Philippines.

[The] danger is North Korea building missiles on which they can put nuclear weapons. The only way we can stop this is to have China participate. We need to find out what China wants, and make a bargain. China is concerned we are flying up and down the coast. Once you figure out what they and we want, and forget about the prestige issues, you could come to a grand bargain.

Q: Looking at this year’s presidential election, do you think either candidate is following the idea of thinking outside the box on foreign policy?

A: Yes, Trump is completely outside the box in the nuthouse, but that’s not what I meant. And Hillary hasn’t done much [outside the box]. This is not an election in which you can have ideas debated. 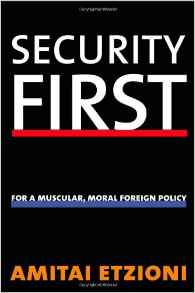 On China, because Trump thinks about everything as a businessman, he thinks about China in economic terms, the TPP, free trading. It becomes an issue Clinton and Trump are running away from.

A: Yes, I just got a manuscript accepted. It’s about avoiding war with China.

A: I was in a war for 2 ½ years, from age 17 ½ to 20. I think I have a better feeling about the cost of war. Everybody should go a very long way to not face another Vietnam, Iraq, Afghanistan, Syria, world war.

If you read the collected documents about how to fight China, none of them have any discussion about what we do with China after we defeat it. That is distressing.