Lauren Acampora is the author of the new story collection The Wonder Garden. Her work has appeared in a variety of publications, including The Paris Review and The Missouri Review. She lives in Westchester County, New York.

Q: Your stories all tie together in fascinating ways. Did you think of all the links before you started writing the collection, or did some of the connections come to you as you were writing?

A: The long, convoluted story goes like this: I'd just finished writing a conventional novel, but was unhappy with it. I had a new baby at the time, and was exhausted by the idea of rewriting the novel or beginning another one anew.

I happened to pick up Olive Kitteridge by Elizabeth Strout at this moment, and was immediately struck by what the “novel-in-stories” format was capable of achieving.

The idea of creating shorter narratives and stringing them together was an exciting alternative to me, and something I felt I could handle with the short bursts of writing time at my disposal.

I sought out other books with similar structures, such as Jennifer Egan’s A Visit from the Goon Squad and Colum McCann’s Let the Great World Spin.

With these wonderful examples in hand, I set to work paring down my novel down to its essential seed: a single story called “The Umbrella Bird.” I then outlined a number of new stories focused on the novel’s ancillary characters. And I realized I already had a few earlier stories that would fit well with this group. 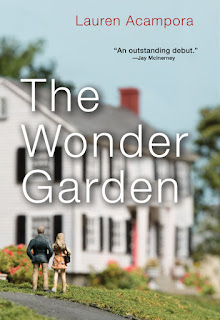 Only then, once I had the whole list of story ideas in hand, did I begin devising the links. I merged characters together, swapped professions/spouses/children, and engaged in all manner of criminal activity to connect them to better dramatic effect.

Once the links started to click, more links began to present themselves, until I finally had to make myself stop. Getting the chronology straight was a whole other headache.

Q: Houses play a big role in the book. Why did you choose that as one of the major themes?

A: Since moving back to the suburbs as an adult, I've been fascinated by the houses in the area. One of my favorite things to do is drive around and look at all the different architectural styles and decor and landscaping choices—and wonder about the residents.

I've found there to be a serious preoccupation with real estate in this area, and in this country, generally, and am intrigued by the American psychology of homeownership. We so often treat our homes as extensions of ourselves, as representations of who we are, or want to be.

Class standing (or aspiration) can be evidenced through the appearance of a house and its property. There can also be a visible desire to conform, or to flout conformity.

And so the appearance of houses in a given neighborhood sparks questions, for me, about the possible relationships between neighbors—the private judgments, jealousies, conflicts and alliances. Some of this fascination undoubtedly came from becoming a first-time homeowner just before writing the book.

Q: Is Old Cranbury based on a real town?

A: Old Cranbury was inspired by a number of towns, and ended up being a kind of hybrid of my hometown (Darien, Connecticut), and others in Fairfield County, like Ridgefield, Wilton and New Canaan, as well as my current surroundings in Westchester County, New York.

Q: Which other authors have influenced you?

A: Not surprisingly, I’ve been inspired by John Cheever's stories, and by the contemporary “suburban” work of Rick Moody and A.M. Homes.  I've also been influenced by the short fiction of Flannery O’Connor and George Saunders.

I have an abiding love for Virginia Woolf's novels, and F. Scott Fitzgerald's (I don't re-read books very often, but when I do, it's usually The Great Gatsby). More recently, I've come to Donna Tartt’s writing, and cannot overstate my admiration for it.

A: I’ve got two novels in the works; one awaiting edits, the other in progress. The former is set in the suburbs, the latter is not.

The new one is in that breathless spot, right now—by turns exhilarating and nauseating—where it’s taking shape but still feels wobbly, like a colt just beginning to use its legs. Will it throw its head up and gallop, or collapse in a heap? My prediction changes by the day, or hour.

A: My husband, Thomas Doyle, created the artwork for the cover of The Wonder Garden.  He's an artist who typically works in miniature—HO scale, or 1/87th of life size—and he custom built a small suburban scene for the book.

I described to him how I wanted the house to look: white, Colonial, black shutters, red door, columns, faux balcony, all the way down to the type of tiny planters on the front step (urn-shaped, of course). I wanted the house to evoke this area of the country, and I think he accomplished that.

Many people assume that it’s a photograph of a real house on the cover; in fact, the model house is only about five inches tall! And the little people are under an inch in height. He specializes in the juncture of the beautiful and sinister in his work, and I think this image captures that.