J. Ryan Stradal is the author of the new novel Kitchens of the Great Midwest. He is the fiction editor of The Nervous Breakdown, and his work has appeared in a variety of publications, including Hobart, The Rumpus, The Guardian, and The Los Angeles Review of Books. He grew up in Hastings, Minnesota, and now lives in Los Angeles.

Q: Your characters appear and reappear throughout the book's chapters, sometimes playing a more major role and sometimes a minor one. How did you organize the structure of the novel, and did you make many changes as you went along?

A: I intentionally constructed the sequence of the chapters so that Eva becomes increasingly remote from the reader, eventually encompassing Eva's story more in the imaginations of the featured characters than in their experiences.

That said, I did write a few chapters that didn't make the book -- one has been published as a stand-alone story on Midnight Breakfast -- and they were cut mostly because they didn't significantly contribute to Eva's development as a character. I only wanted a few chapters that really kept her at a distance and I wrote more than I needed.

Q: Why did you decide to focus on food in the novel?

A: Food, to me, is a signifier of so many things, and as such, a rich background for a narrative. To write about characters in terms of their relationships with food is to write about family, class, religion, heritage, socioeconomics, and geography, among other things.

I really enjoyed the opportunity to explore as many of those topics with food as the focus; maybe I wasn't yet ready to tackle them head-on. 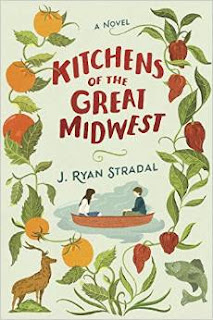 I've also, since childhood, been obsessed with food that I considered to be exotic or peculiar, and I've been writing about food and food-related topics in my fiction pretty much since I've been writing.

Finally, as a writer who's driven by questions and a desire to learn about new topics, I was deeply motivated to learn more about food and wine and apply that knowledge in a story.

Q: How did you come up with your main character, Eva, and with the idea of showing glimpses of her over more than 20 years of her life?

A: Eva was inspired in part by two chefs that I've known for over 15 years, Patty Clark and Amy Kovacs. I've known each of them since before they were chefs and I've had the privilege to witness the evolutions of their talent and personality.

They were each significantly important resources while I was writing the novel, even if I didn't always let them know why I was asking such specific questions.

In regards to Eva, I was initially interested in telling the story of a dinner party through the perspectives of guests that largely didn't know one another, but early on I shifted the focus to the host -- Eva -- and I felt that given her progression from bullied pre-teen to enigmatic culinary celebrity, I kept the structure because I felt that conjecture and distance are always sound narrative adjuncts of mysterious characters.

Q: How did you decide on the book's title, and how important is the novel's Midwest setting to you?

A: The title came early and easy -- it was what I named the Word file very early on when I started to put the chapters together. To me, it was the kind of title that loomed as a reminder or a thematic keystone.

The setting was everything; I often put setting at the front of every story idea I explore, and this novel was no different. I love the upper Midwest and quite simply, there was no other place I could consider setting this story; this story exists because of this setting.

A: I'm working on my next novel, which is also set in the Midwest, but that's all I can tell you about it.

A: I want to thank all of the people, from all parts of my life, who came out to support me during the first leg of my book tour, which just ended on Wednesday, August 12, at Vroman's in Pasadena.

It was especially wonderful to catch up with my elementary school librarian, Pat Schultz, in Minnesota, and share readings and discussions with some amazing writers who I admire, like Aaron Burch (whose journal Hobart published my first short story ever), Stephen Elliott, Julia Ingalls, and Gallagher Lawson.

I'd love to do it all again. I just need a week or two to sleep first.