Paul Evans Pedersen, Jr., is the author most recently of The Legendary Pine Barrens: New Tales From Old Haunts, a collection of stories and songs focusing on Southern New Jersey's Pine Barrens. Pedersen, a journalist, musician, and photographer, also has written another collection, Required Restroom Readings. In addition, he designs jewelry made from antique glass. He lives in Elm, N.J.

Q: You write that you've been fascinated by the Pine Barrens since first going there at age 7. What about it continues to interest you?

A: What amazes me the most is that it’s still there. We were close to losing it in the ‘60s; [it almost became] close to the largest jet port in the country, but luckily the governor [Brendan Byrne, after reading a book about the Pine Barrens by writer] John McPhee put steps in place and saved it as a national reserve.

There are 1 million-point-one acres of pristine pines sitting on 17 trillion gallons of fresh water. So close to the ocean, so close to Philadelphia, so close to Trenton and New York. It’s still pristine, and it’s still there. There are animals and fauna, stuff that grows down south and the farthest north it’s found is the Pine Barrens. Stuff that grows up north, and the farthest south it’s found is the Pine Barrens.

Q: Do you think your stories will leave people with a new impression of the area?

After you read the book, you’re less inclined to think it’s a wasteland, a bunch of trees. Pine Barrens—it’s anything but barren….actually, there’s so much going on!

Q: Do you draw on various folk traditions for your stories and songs?

A: I don’t think I draw on folk traditions. I just tell it the way I hear it in my head, and the way I tell it to my kids and my grandkids. I wrote the book to preserve the stories. I would ask, Why this? And I made the stories up [to answer the questions]. 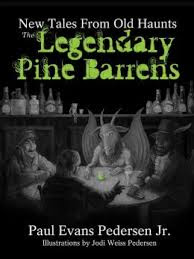 Q: What have the reactions been to the book?

A: Nothing but favorable reactions. In the beginning I was a little worried. There had been no new legends or myths from the Pine Barrens for a long time. [I thought] people would say you can’t build new myths, but that’s how legends about the Pine Barrens got started. I had no idea there were professional storytellers wandering around the Pine Barrens.

Q: When was that?

A: The 1800s. The Pine Barrens were being cleared, and jobs started leaving. People started telling stories, singing songs, hopefully could make a few coins. I was drawing on that.

Q: What is the origin of the story of the Jersey Devil?

A: The Jersey Devil was reported to be the 13th son of a woman named Mrs. Leeds or Mrs. Shrouds. It goes back to the 1700s. This woman was pregnant with her 13th child, and was tired of being pregnant, so she cursed it: May this child be a devil!...It’s almost 300 years old. That’s the original legend.

One [version of the legend] that’s more believable, mine, happened in that well. I saw a pair of birds coupled on my pool; that’s how my story got its origin.

A: Another collection and a novel. The collection is about the Pine Barrens, more myths and legends, ghost stories, scarier stuff. I wasn’t real sure when I wrote this [The Legendary Pine Barrens] what age group it was pointed at, and I didn’t have any real scary stuff.

The novel is going to be about the possibility that the Jersey Devil is real. There are scientists now who think this could be a carryover from a different time, like Bigfoot. If you Google “dimorphodon,” you see a creature that looks like how people describe the Jersey Devil.

It’s fiction, of course, but there’s going to be a dimorphodon thing as part of the creature….The legend goes back way before [Mrs.] Leeds. People have seen stuff for years and years—who knows what they’re seeing?

Q: Are you going to write from the creature’s perspective?

A: A little bit; [the reader will be] intimately acquainted with the thing and what it thinks about.