Nathaniel Philbrick is the author most recently of Bunker Hill: A City, A Siege, A Revolution. His other books include Why Read Moby-Dick?, The Last Stand, and Mayflower. He lives on the island of Nantucket, Mass.

Q: Why did you decide to focus on the battle of Bunker Hill in your latest book?

A: Instead of a focal point, I decided to make the Battle of Bunker Hill the turning point of my book, where a narrative previously dominated by Dr. Joseph Warren (a leading patriot who dies in the battle) turns to George Washington, who takes command of the provincial army soon after the battle. Bunker Hill was where a revolution turned into a full scale war of independence that would ultimately drag on for eight long years.

Q: You write that "the city of Boston is the true hero of this story." Why is that the case?

A: Although Warren and Washington are focal points, the community of Boston is what the book is really all about, a city that gets literally turned inside out by the revolution. In the beginning Boston is the center of patriot defiance, but with the arrival of the British army, it becomes a city under military occupation as thousands of its residents flee to the surrounding towns. 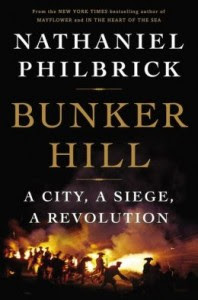 After Lexington and Concord, Boston becomes a British-occupied garrison under siege as thousands of patriot militiamen flood into Cambridge and Roxbury. After the evacuation of the British in March 1776, the residents return and Boston gradually begins to put itself back together. It's a fascinating process that most of us don't necessarily associate with the Revolution.

A: I was surprised by the ambivalence most people felt at the beginning of the revolution. Most people didn't care that much about the issues that the patriots were fulminating about; they simply wanted things to remain the way they had always been, since the colonists were the least-taxed and freest people in the British empire.

But as tensions mounted and violence broke out, people had to choose. But even after Lexington and Concord it wasn't black and white, and I ended up having a lot of sympathy for those on both sides, and especially for the people caught in the middle.

Q: Bunker Hill features a large cast of characters. Are there some that you find especially admirable (or especially unpleasant)?

A: Joseph Warren, who emerged as the leader of the on-the-ground revolution in Boston, was eloquent and passionate and if he hadn't been killed at the Battle of Bunker Hill, he might have been one of our Founding Fathers. And then there is Dr. Benjamin Church, a leading patriot who turns out to be a British spy. Those two are kind of the Ying and Yang of the book.

A: I'm continuing with the story of the Revolution as the action moves to New York, New Jersey, and Pennsylvania.

A: I have a golden retriever named Stella.