Julia Scheeres is the author of A Thousand Lives: The Untold Story of Hope, Deception, and Survival at Jonestown, and the bestselling memoir Jesus Land. Scheeres, who has written for the Los Angeles Times, The New York Times, and other publications, works at the San Francisco Writers' Grotto, a writers' collective, and lives in Berkeley, California.

Q: You write on your website, "There are many correlations between Jesus Land and A Thousand Lives, especially in matters dealing with race, seclusion and oppressive belief systems." What drew you to writing about those themes?

A: My childhood. I was raised with two adopted black brothers in rural Indiana, in a fundamentalist Christian family. My brother David (who was my same age) and I were always looking for a place where we'd belong. In Indiana I'd get called a nigger lover, he'd get physically attacked. We would have been intrigued by Jim Jones' church. He integrated pews and preached a message of social justice instead of the hellfire sermons we were used to. 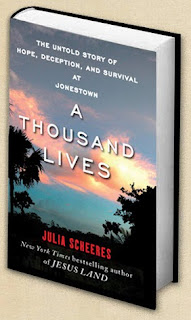 Q: You based much of your research for A Thousand Lives on material that the FBI had recently released. What was the most surprising thing that you discovered?
A: All the notes from Jonestown residents pleading with Jones to let them return to the U.S. It was heartbreaking. Mothers pleading for the sake of their children to let them go. Grandmothers promising to sell off all the family heirlooms and send him the money. Of course he had much darker plans for them and refused to let anyone go.

Nevertheless, media reports after the massacre stigmatized all Jonestown residents as "Kool-aid drinkers" and blind sheep. My book argues the opposite - that Jones lured his congregants down there to kill them. They were trapped in the middle of the jungle and had no way to leave. He planned to kill them for years before he found a means to do so.

Q: You write that before learning of the FBI material, you had been planning to write a novel about a charismatic preacher. Do you ever plan to go back to that novel?
A: Not for the moment. Nonfiction sells better than fiction, and right now, I need money. My husband is a teacher and we live in one of the most expensive cities in the country (Berkeley, CA). We can't even afford to buy a house here. 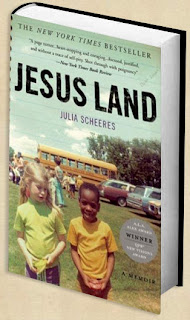 Q: In the book, you refrain from using the word "cult." Why, and what impact does that word have when people think about Jonestown?
A: I wanted readers to approach the Jonestown story with an open mind. "Cult" is a loaded word. No one joins a cult. They join a church, a movement....that becomes something else. It took a book to explore the different reasons people ended up trapped in Jonestown.

Q: What are you working on now?
A: I'm working on a follow-up book to my memoir Jesus Land, exploring my years in Spain. I moved to Spain to escape the Midwest after graduating college and fell in love with a dashing anti-terrorist agent. We lived an idyllic life in Valencia until he slowly went mad.

A: My first book, Jesus Land, lead to the demise of the abusive reform school it featured. After my memoir was published, other former students came forward to share their stories. We created a website that generated a lot of media buzz. So that was a very unexpected and triumphant outcome of that book. Writing is power.
--Interview with Deborah Kalb