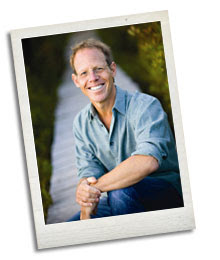 Tony Horwitz is the author of six books, including Confederates in the Attic, Blue Latitudes, and his most recent, Midnight Rising: John Brown and the Raid That Sparked the Civil War.

Q: Why did you decide to write about John Brown and his raid on Harpers Ferry, and was there anything in particular in the course of your research that surprised you about him?

A: I’ve always been intrigued by John Brown and Harpers Ferry, but when I began doing some research I was stunned by how much of the story I didn’t know. For instance, the cast of characters apart from Brown includes Frederick Douglass, Henry David Thoreau, Robert E. Lee, John Wilkes Booth, and a radical underground of young idealists. I wanted to get inside their heads and understand how they and the nation were propelled towards violent conflict. 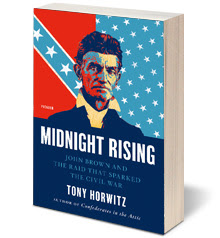 One of the many surprising things I learned about Brown was that for most of his life he was a clean-shaven family man and entrepreneur—in essence, a fairly conventional American on the make. Imagining him, as we often do, as a fringe character, driven by madness or religious zealotry, makes it easy to dismiss Brown as a crazed lone gunman. In reality, he was representative of his times, and radicalized by them. His life is a window into the country at large and its decades-long plunge towards civil war.

Q: One of your best-known books is Confederates in the Attic, which also focuses on the Civil War. What about that conflict intrigues you, and do you plan to write about it again?

A: I’ve been a Civil War nerd since boyhood, when my father read me books about the conflict and took me to battlefields. As I got older, my interest shifted towards the issues at stake in the war, race in particular. Also, I can never get enough of the writing and photographs from that period. The Revolution seems very distant to me; not so the Civil War. I can walk a battlefield in Virginia, read letters, or stare at sepia images of young soldiers and feel instantly transported to the America of 150 years ago. It’s time travel to an era that’s still very relevant to our own. 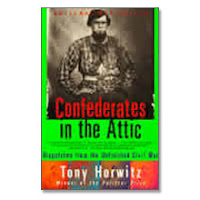 I don’t have plans to write another book about the Civil War—there are enough volumes on the subject already! But I may revisit the pre-war period I explored in Midnight Rising. As a nation, we tend to obsess on the 1861-1865 drama, the great battles and leaders. I’m now more drawn to probing the conflict’s roots and the question of how Americans came to slaughter each other by the hundreds of thousands in the first place.

Q: Of all the places you've been over the years as you've researched your books, are there some that really stand out in your mind as especially fascinating?

A: My writing has taken me to about 40 countries, so it’s hard to choose. Yemen may be the wildest and weirdest land I’ve visited. The landscape seems out of Arabian Nights—mud towers, jagged mountains, baked desert, labyrinthine bazaars—and Yemenis are both ferociously armed and pleasantly addled by qat, a mildly narcotic leaf. I felt stoned there, even when I wasn’t. Not the safest place on earth, but certainly among the most exotic. 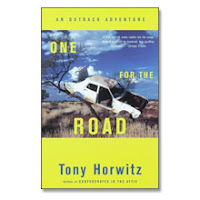 Outback Australia also stands out. When I hitchhiked across it, 25 years ago, the harsh empty landscape felt lunar, and the people almost as alien. Drivers measured distance in the number of beers consumed en route; i.e. a hundred-mile stretch was “about a six pack.” And Aboriginal culture is the most ancient and profoundly non-Western I’ve encountered. I felt very far away, as in Yemen.

Q: Your wife, Geraldine Brooks, is also a writer--do you discuss your writing with each other as you're working on your books? 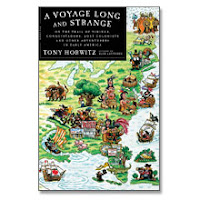 A: We write at desks about 10 feet apart, and have for most of the past 28 years. We consult on ideas and sentences and metaphors throughout the day, and edit every line of each other’s work before anyone else sees it. So it’s hard to separate our marriage from our writing. That being said, like most couples, we devote 90 percent of our conversation to such lofty topics as, “who’s meeting the schoolbus?,” “has the dog been fed?,” or “did you pay the Comcast bill?” The Iowa Writers’ Workshop it’s not. 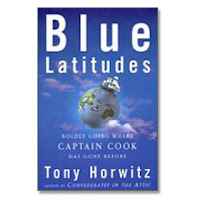 A: At the moment I’m writing magazine stories, principally on historical topics for Smithsonian, and noodling on a next book project. But I haven’t committed to anything yet. A book is a long-term commitment and I need to be sure I’m truly in love with a topic before I tie the knot. 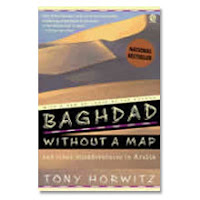 A: I’ve written six books and it never seems to get easier. Many people imagine writing as a romantic craft, but for me at least, it’s about getting your butt in the seat for as many hours a day as you can and piling one word on top of another, whether you feel inspired or not. The best writing advice I ever got was from Judith Viorst, the most disciplined and hard-headed author I know. As she put it: “When there’s no wind, row.”