Betty G. Birney is the author of many books for children, including The World According to Humphrey and eight other books about Humphrey the hamster. She also has written for children's television, including episodes of Welcome to Pooh Corner, Fraggle Rock, and Zoobilee Zoo.

Q: How did you come up with a hamster named Humphrey as the hero of your series? And did you know from the start that it would be a series, or did you think it would be just one book?

A: The World According to Humphrey, the first book, didn’t start out to be a book about a hamster, but it was an idea about a classroom pet. My son was in a science classroom with a lot of classroom animals – even a boa constrictor. I remember looking at them all and thinking, “I wonder what this classroom looks like through their eyes. What do they hear and see and think?” I decided it would be fun to write a book from the point of view of a classroom pet. Later, that turned out to be Humphrey the hamster.

But I think the seeds of the book came much earlier. When I was growing up, I used to write my aunt letters from my dog, Mitzi. I enjoyed imagining what my dog thought of my life. So I was always interested in looking at the world from a different point of view. 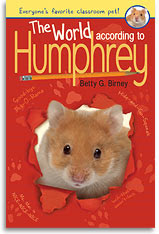 While I had an inkling that it would make a fun series, I sold The World According to Humphrey as a single book. Before it was even published, my editor asked for a second book. The series grew gradually and I just finished book 10.

Q: You wrote your first book at age 7. Did you ever consider any other career that didn't involve writing?

A: I loved acting in junior high and high school, but I always expected I’d write and act. In college, my interest in acting waned and I concentrated on writing. But I am married to an actor.

Q: Why did you decide to write for kids?

A: I fell into writing for children when I started out in television. I was working at Disney as a trailer producer way back when and I had an opportunity to write for one of the first children’s shows that aired on the day the Disney Channel went on the air. It was a Winnie-the-Pooh show. It turned out I had a knack for writing for children and I thoroughly enjoyed writing 90 episodes. I kept on writing hundreds of children’s television shows and realized that what I really want to do was write children’s books, just as I did when I was seven. By then, I had a young child, so I was reading a lot of wonderful children’s books. 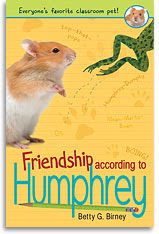 Q: What do you see as the differences between writing a novel and writing for TV?

A: In one way, there’s not that much difference. A story is a story with a beginning, a middle and an end, no matter how you tell it. The main differences are mechanical. For instance, it’s much easier to move characters around in a script with cuts and dissolves, and you don’t need all those attributions, such as “he said,” “she said.” On the other hand, you can be more interior in narrative fiction. You can explain what someone is thinking in a book (especially in first person) but in a script, I can’t stand it if someone talks to himself as a method of exposition in a film. Can’t stand it.  I tend to approach fiction like a script. I construct scenes, make sure there’s action, move my characters move around, and I tend to see what’s happening in the story like a movie in my head.

A: I just turned in the first draft of the tenth Humphrey book, Secrets According to Humphrey. Now I must write the eighth Humphrey’s Tiny Tales book, which are only published in the U.K. at this point. These are shorter, illustrated books. My Playful Puppy Problem is about to come out there. Humphrey is huge in the U.K.

A: I love Humphrey and he is definitely a part of me. But I do want to carve out time to write some other books, more in the vein of TheSeven Wonders of Sassafras Springs, which is very near and dear to my heart.