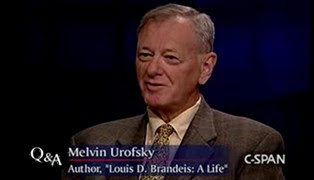 Historian and legal scholar Melvin Urofsky's many books include Louis D. Brandeis, A Life, a biography of the Supreme Court justice. Urofsky, a professor of history and of law at Virginia Commonwealth University, also has written and edited other books about Brandeis, the Court, and American legal history, among other topics.

Q: You have devoted decades of your life to studying the life and decisions of Supreme Court Justice Louis D. Brandeis. What first interested you about him, and what would you say is his greatest legacy today?

A: I first became interested in LDB as a graduate student.  I was exploring a dissertation topic on Woodrow Wilson and LDB, whom Arthur Link had called the “intellectual architect of the New Freedom.” In the research I learned (a) that LDB was a very interesting person involved in all sorts of Progressive reforms, the law, Zionism, Supreme Court, etc., and (b) there was not enough material to make a dissertation on my topic. (I did get a journal article out of it.) I was then teaching at Ohio State, and after I came back from Louisville (where the Brandeis Papers are), I spoke with one of my colleagues, David Levy, who had also worked in the papers for his dissertation.

One thing led to another, and we decided to apply to the University of Louisville Law School for permission to edit the letters.  They gave us permission, and the chair of the History Dept. at Ohio State, Bradley Chapin, taught us how to write a grant application.  The NEH liked the idea, we got a grant, and we were off and running. The Letters led me to other aspects of LDB’s life, such as a book on American Zionism, and eventually I decided that when I retired I would write a full-scale biography, which I did.

The second part of your question is more complex, because I think LDB left us more than one legacy.  As a lawyer he taught how the law could be used as an instrument of reform.  He made Zionism acceptable to American Jews, who would later play a key role in helping support Israel.  On the Court he laid down the modern foundations for free speech jurisprudence and the right of privacy, among other things.  Each of these “legacies” takes up several chapters in my book. 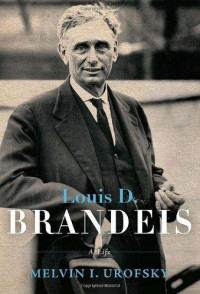 Q: In your work on Brandeis over the years, was there anything that particularly surprised you about him, or challenged your previous assumptions?

A: I can’t say that I had a lot of assumptions, because initially I knew very little about him.  From history courses I had learned about the “Brandeis brief” in Muller v. Oregon (1908), and that he had been an important Supreme Court justice. I did not learn about his Zionist work until we came to that part of the letters where he becomes interested in the movement.  So by the time I came to write the book, I had been surprised over and over again by how effective a reformer he had been, how successful and creative a lawyer, and how involved he was in the politics of the era (esp. with Wilson and later with FDR).  Only after I decided to go to law school when I was 40 did I really come to appreciate how important a justice he had been.

Q: Brandeis became the first Jewish Supreme Court justice in 1916, and in your book you examine his involvement in Zionism. What role did Judaism play in his life?

A: Hard question, because Judaism as a religion played practically no role; he was not in any way, shape, or form observant, nor did he belong to any synagogue.  What appealed to him was the ethical dimension of Judaism, the prophetic as against the priestly, and he saw in the early Zionist movement the idealism he himself cherished.  He believed that in a small country like Palestine, without industrial resources, it would be possible to recreate the type of Jeffersonian small-unit society he idealized.

Q: You've written many other books in addition to your work on Brandeis, some of which look at Supreme Court history. Where would you say the current Court stands when you compare it to previous Courts you've studied, both in terms of its decisions and its personalities?

A: The Court certainly has personalities; whether it has giants is another story, but I don’t think any of the opinions I have read in the last 20 years comes anywhere near the great opinions of Holmes, Brandeis, or Brennan.  Sometimes, however, there is a temporal element at work, and it may be years before we come to see that some of the opinions of the Rehnquist and Roberts Courts are influential and lasting.  One has to keep in mind that for the most part the burst of creative activism that marked the Warren Court is very rare in Court history.

A: I am trying to explore dissent as a form of constitutional dialogue, one that takes place not just among members of the Court, but between the Court and Congress, the President, the legal academy, and the public.

A: I have three wonderful and bright grandchildren, and if I keep on working, when they are in their late teens I will take them on research trips as I did with their parents.