Bernice Steinhardt is the co-author, together with her late mother, Esther Nisenthal Krinitz, of Memories of  Survival, which features her mother's artwork depicting her experiences during the Holocaust. A movie about Esther Nisenthal Krinitz, "Through the Eye of the Needle," debuted last December. Bernice Steinhardt is also the president of Art and Remembrance, an arts and educational organization.

Q: How did you, as a child, learn about the experiences your mother had gone through during World War II?

A: Unlike many other Holocaust survivors, my mother always talked about her experiences--in fact, I can't recall a time when I didn't know about my mother's life before and during the war. As a child, I loved to sit at the kitchen table while my mother fixed dinner or baked--she was a fantastic cook, and the smells were heavenly! And as she cooked, she would tell me stories. They might have been stories about going into the oak woods to
gather mushrooms, or about the baby geese she used to look after, for example. But invariably, these stories about her idyllic life in a small village led to stories about how the war arrived and how she made the fateful decision to separate from her family in order to save her life. I think those events--which had occurred only a few years before she began to tell me about them--were still so astounding to her that she needed an audience to make sense of them, and I was near by and listening with rapt attention.

Q: Had your mother always expressed herself through art, or were these embroidered panels she began creating at age 50 really a change for her?

A: My mother always loved creating things--she sewed and knit for many years, and made clothes for me and my sister and beautiful decorative things for the house. But she never tried her hand at anything artistic until she decided that she wanted my sister and me to see what her home and family looked like. She had never been trained in art, she had never learned to draw, but she could sew anything--she was apprenticed to a dressmaker as a child. So when she wanted to depict her memories, she picked up a needle and
thread--it was the medium in which she knew her way. Once she realized she could tell her story by adding stitched captions to her pictures, she continued to work without pause until shortly before her death. She never thought of herself as an artist, though--she always said that she created the panels just for her daughters. But her technical skill, her eye for color and composition, and of course, her brilliant storytelling came together to produce a remarkable work of art. 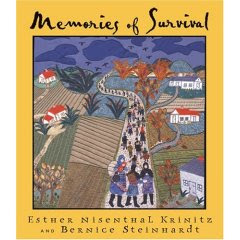 Q: How did you end up turning her art into a book, and what has the response been?

A: The book was one of the many things that came about once I decided that I needed to get my mother's pictures out of my house. My parents lived nearby, so when my mother finished each picture, she would give it to me to hang in my house. After a while, I ran out of wall space, but by this point, it was also clear that the art work deserved an audience beyond the family and friends who came to my house. My first thought was to have the work exhibited, and in fact, in 2001 and then again in 2003, the American Visionary Art Museum in Baltimore--a fantastic and entirely original museum dedicated to the work of self-taught artists--had a long-running exhibition of my mother's work, where it was seen by a book editor who approached me
about doing a book. My mother  died shortly before all this, but she always wanted to have a book, so I know she would have been just thrilled to see it. We were all very pleased with the book--it presents the art work beautifully, and because it was published as a picture book for children, it's accessible to all ages. It's earned fantastic critical reviews, and it won an award from the Association of Jewish Libraries. But even more gratifying to me has been to see both children and adults poring over all the details in each of the pictures, deeply absorbed in the art and story. 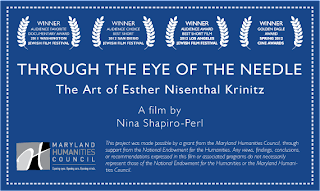 Q: And how did the movie "Through the Eye of the Needle" come about?

A: Nina Shapiro Perl, a dear friend and filmmaker who knew my mother and saw all her art work as it was created, always thought that my mother's art and
story would make a great film. She wasn't the only one: In the late '90s, the filmmaker Lawrence Kasdan saw my mother's art and wanted to make a feature film about her. For three days, he videotaped my mother telling her story, which he used as the basis for his screenplay. The film was never made, but he very generously gave us all the interview tapes--abut 20 hours--to use. With this rich material, along with the visual images of the
art work and additional interviews with my sister and me and other
commentators, Nina created a beautiful and compelling documentary that tells not only my mother's story of survival, but also the story of Esther as an artist who came to tell her story in this unique way. The film debuted last December and has been making the rounds of film festivals, where it's won several awards thus far--that's been very gratifying. It's also being screened now at the American Visionary Art Museum, where the exhibit has returned for a year, until September 2013.

Q: What is next for you, and for Art and Remembrance?

A: Our next major effort is what we're calling the HeART and Story Project. When my sister and I created Art and Remembrance in 2003, we envisioned that while sharing our mother's art and story would always be at the core of our mission, we would also showcase the work of others, like our mother, who had
experienced war and injustice and conveyed those experiences in art and story. We've co-sponsored programs and exhibits, for example, of arpilleras--story cloths created by Chilean women during the Pinochet regime to remember their husbands, sons and brothers who disappeared.

The HeART and Story Project is intended to use Esther's story to inspire others to share their own personal and family histories through art and story. Working with community organizations, including those serving immigrant and underserved populations, we want to create a model for film screenings, discussions, and story cloth-making that can be replicated in communities around the country. We believe that this can serve a variety of purposes, including bridging the division between immigrant and native-born
Americans by allowing them to find their common humanity.

We've seen how deeply moved audiences have been by Esther's art and story, and I also know how telling her story helped my mother to deal with her experiences. We believe that many others can similarly benefit from this kind of healing connection.

A: For those who would like to learn more about Art and Remembrance, I'd encourage you to visit our website: www.artandremembrance.org. There, you can also see images of my mother's work and a preview of our film.

And thanks to you, Deborah, for having me as a guest. It's a great honor to be able to share with others this deeply meaningful family legacy.