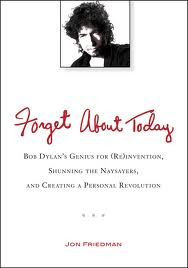 Q: In your new book, “Forget About Today,” you describe Bob Dylan as a “role model.” Has he been a role model for you in your own life, and if so, how?

A: Yes, he has. He has been a writer who represented wit, compassion and style in his work. He has showed how someone could start his career at the bottom and go quickly to the top, all by himself. That's a role model in my book.
Q: You examine various choices he made during his career (moving to New York, “going electric,” making other changes in his musical styles). In addition to the positive lessons you found, did you also encounter any negative lessons or cautionary tales?

A: Yes. Dylan's reluctance to embrace videos in the early 1980s indicated that his stubbornness could work against him -- a cautionary tale. I admire Dylan for standing apart from the crowd, but sometimes you have to recognize that time marches on -- and you can't ignore technology.

Q: Would you define your book as a self-help book? Why or why not?

A: YES -- AND NO! I hope folks will read it and see how Dylan went from nothing to great success, armed only with his ability and dreams. And everyone should have such grand ambitions in their lives. I don't think Dylan would take the time to teach us anything, but we can learn from his example.

Q: Bob Dylan chose not to be interviewed for your book. Do you have any sense of his reaction to the book, or, if not, what do you imagine it might be?

A: Yes. Bob has written in skywriting above the Pacific that this is the greatest book he has ever heard of! Ha ha. I don't know what he thinks of my book or if he has ever heard of it. I think he should feel flattered by the attention, and my conclusions about him.
Q: What’s your favorite Dylan song, and why? Are there any of his songs that you dislike?

A: I have about 25 favorite Dylan songs! But since I took the book title from a phrase in "Mr. Tambourine Man," I'll go with that gem as my No. 1 favorite. Right now. I do dislike a few of his songs -- especially from the 1980s albums -- but his batting average is very high in total!
Q: Anything else we should know?

A: I hope your readers enjoy reading my book. It was a true labor of love for me to write. For any more information, feel free to read my Bob Dylan/"Forget About Today"-centric website, http://jonfriedman.net
--Interview with Deborah Kalb
Posted by Deborah Kalb at 8:47 AM